Ah, Penneys: Jocks, socks and fake eyes all round as shops open for first time in three months

Queues from early morning outside branch on Dublin’s Mary Street

Customers queued from 4am on Mary's Street in Dublin for the reopening of Penneys after lockdown. 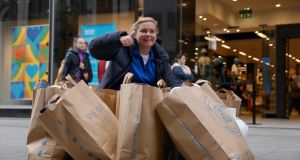 “This is the only place I’d queue for. I wouldn’t queue for Dunnes for my dinner, I’d rather starve. But I’d queue for Penneys no bother specially cos it has been closed for so long.” said Chloe Whelan from Ballymun as she stood on Dublin’s Mary Street surrounded by large brown bags with familiar blue lettering.

If there was ever any doubt that absence does indeed make the heart grow fonder, it was forever dispelled over the course of a grey Friday morning as hundreds of people streamed into Penneys in search of “jocks and socks and fake eyes” as one shopper put it to a friend she was talking to on her mobile at the end of her expedition.

The queue started forming in the darkest hour before dawn and had swelled to a couple of hundred by 8.45am by which time management – after discussions with gardaí - decided to throw open the doors of the flagship branch for the first time in almost three months.

“We were here by eight,” said Katie White McCann from Finglas. She was delighted to have been in and out before Penneys was even due to open. “It was closed for so long so this was just so exciting. It was like a Christmas morning except better, it was like a Christmas morning after a long lockdown. That was just horrible, it was like torture, I couldn’t see any of my friends or anything.”

The levels of excitement and happiness rippled up and down the line.

“I only went in for underwear and pyjamas and came out with €170 worth of stuff,” said Sarah Adams from Finglas. She had joined the queue shortly before the unexpected earlier opening but her daughter Sienna had been there longer, a whole lot longer.

“She was in the queue from 4am,” the Adams family elder said as her daughter smiled brightly by her side. “She came in with her friends.”

“I didn’t sleep at all last night, I was just so excited,” Sienna said.

It was impossible not to stare at the child’s feet as she spoke. She was wearing a pair of black furry open toed slippers.

The Irish Times asked if she had bought them in the shop. Surely she couldn’t have stood in line for almost five hours through a cold summer’s night and morning wearing only a pair of slippers?

“Ah no, it was grand,” the teenager said.

Penneys shoppers are made of stern stuff and not even impending childbirth could keep them away on the big day. “I came in around 8.30am,” said Jasmine Kelly from Crumlin who is just a week shy of her due date. “I needed some stuff for the baby and my hospital bag,” she explained. “I’m not wrecked, I’m alright but my credit card is a bit wrecked.”

“Tan, lashes and make up, that’s all I’m here for,” said Chloe Regan from Firhouse. She had joined the queue at a comparatively tardy 7am. “I thought the queue would be really bad but it was grand,” she said. “I really missed all the cheap stuff.”

When asked about her plans or the rest of the day she simply shrugged. “Not sure, probably just wander around town for a bit.” And away she went.

“I’m just here to get the essentials, the things I couldn’t get,” said Mia Devlin from Donaghmeade. “Make up, wipes, a few bits a pieces, you know yourself.”

Nadine O’Riley didn’t have far to come from her home on Greek Street in Dublin 1 and had joined the queue at 7.30am. She was thrilled with all her purchases, all €300 worth of them. “You can’t beat Penneys,” she insisted. “It’s just so cheap.”

By 10am the queue which started at the Mary Street entrance was snaking around the corner and all the way up Jervis Street to the Parnell Street junction. There were about 200 people waiting to get in. Almost none of them were wearing masks.

Emma Biggar from Blackrock was an exception. “I had Covid at the very start and was in hospital for 12 days,” she said. “I was in Vincent’s and then St Michael’s. But I am okay now I have had the negative swab. I am wearing the mask more to respect other people and to keep everybody else safe,” she explained. And what was she here to buy? “Nothing, I’m just here to keep my sister company.”

While the queue was long and largely mask-free it was never disorderly and was marshalled with military precision by a team of high-viz jacket wearing security staff who told agreeable people when to move and where to stand.

“How are you getting on,” one of them asked another.

“No, it’s going to be like this all day.” Both men sighed.

When The Irish Times started to marvel at how calm everything was despite the crowds, one of the guards hastily interrupted.