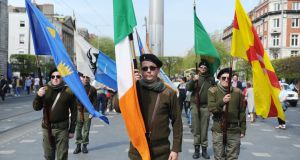 Another march by dissident republicans, some of them wearing paramilitary style attire, took place on Dublin’s O’Connell Street on Monday to mark the 1916 rising.

Just before 2pm about 55 members of Republican Sinn Féin, which has links to the Continuity IRA, marched from the Garden of Remembrance to the GPO where the proclamation was read aloud.

Earlier on Monday about 100 members of the 32 County Sovereignty movement, an anti-Good Friday agreement organisation with links to the Real IRA, did the same.

The marches come four days after the murder of journalist Lyra McKee in Derry by a suspected member of another dissident group, the New IRA.

On Saturday another march on O’Connell Street by Saoradh, which is associated with the New IRA, was widely condemned.

There was a significant garda presence during both marches on Monday. Uniformed gardaí walked behind and beside the parade while plain clothes members of the Special Detective Unit (SDU) mingled in the crowd, occasionally asking people questions.

Men in unmarked cars with tinted windows, presumed to be members of the SDU or National Surveillance Unit, watched attendees as they gathered at the Garden of Remembrance.

As members of Republican Sinn Féin walked to the GPO, led by a colour guard of men wearing green jumpers, combat boots and berets, one bystander asked them “do you want peace?”

Some marchers flashed peace signs while others told the man to “f**k off”. Other bystanders then congratulated the questioner.

Outside the GPO a Republican Sinn Féin member read the 1916 Proclamation before another man gave a speech warning of infiltration of the group by people who wish to damage it an complaining about the “misuse of the honourable name of Sinn Féin” by other groups.

He said was difficult to attract new members to the group “because republicanism has been denigrated” and “we have to contend with the media.”

The Irish State is “a corrupt rotten illegal State” which “has to be taken apart”, he said to small amount of applause.

There was no mention of the murder of Ms McKee.

Both events passed off peacefully. It is understood neither group had made the Garda or Dublin City Council aware of the planned marches.