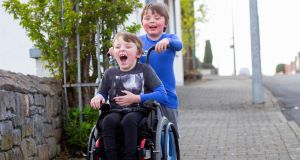 Callum Woods says that for his First Holy Communion next year he wants to walk – and wear a bright-blue suit with a dickie bow.

The seven-year-old’s parents, Aisling and James Woods from Cuilmore, Gurteen, Co Sligo believe that suits and dickie bows will not be a problem when the occasion comes around for Callum and his twin brother, Shea.

But they do worry that even after life-changing surgery a month ago, Callum may still be in a wheelchair in May next year, as they believe he is not getting the help he needs .

“I had my two kneecaps reconstructed,” says Callum, who in a journal written during his month-long stay in Cappagh Orthopaedic Hospital refers to the “magic hands” of his surgeon.

The surgeon, Prof Damian McCormack, recently wrote a letter to managers at Sligo University Hospital detailing the progress made by Callum, but pointing out that he had to be kept on as an inpatient because of the apparent lack of physiotherapy services in the area.

“Obviously it is very disappointing that children from the west are required to stay as inpatients in Cappagh for lack of such resources,” he wrote, noting the inconvenience and cost to all concerned.

“He was getting three hours’ physio a day in Cappagh , and now he’s home and getting one hour a week in Sligo – and that will be for only six weeks,” he added.

Callum’s parents say they never expected a miracle, and acknowledge their boy may never walk unaided, but they want him to have the best possible chance to be as independent as possible.

“With so little physiotherapy available we are afraid he will regress,” says his father, James. “We have put him through two savage surgeries so he deserves every chance.”

Callum was diagnosed with cerebral palsy as an infant. His parents say he is full of mischief and always up for the rough and tumble of life with Shea. He loves playing Nintendo Wii and more physical sports.

“We have a rule in our house that every one comes down to Callum’s level when we are playing,” says James.

Callum had his first surgery to lengthen his hamstrings last August but it was after the “extensor mechanism reconstruction” last March that his parents began to believe that his life could change dramatically.

“The first day after that surgery he stood probably for about 30 seconds with the frame. It was actually like a miracle to us,” says Aisling.

“A week later he could walk from here to the wall, and then after another week he could walk three times that far. He was exhausted but it was amazing,” James adds.

In his letter, which was read to the Dáil by Sligo-Leitrim TD Eamon Scanlon in an attempt to highlight the need for more physiotherapy services, Prof McCormack said he hoped Callum would progress on to crutches.

“We do 90 per cent of the physio with him but we need to be shown what to do,” says Aisling. “As he progresses we need guidance to make sure we are doing everything right.”

Scanlon said it was unfair that children with needs were not getting the appropriate follow-up care after surgery “given the billions wasted in the health service” .

“The Woods are fighting for their son because they don’t want him to regress but obviously other children are affected too,” he said.

James, who works as a theatre operative at Sligo University Hospital, makes no apology for fighting for Callum, “especially when you think of all the money that has gone into that pit hole of the children’s hospital”.

He says his employers have been very good to him when he has needed time to be with Callum in Cappagh hospital.

“And we don’t have any criticism of the actual physiotherapy service in Sligo, it’s just that there isn’t enough.”

The HSE said it was unable to comment on individual cases but that it would continue to liaise with the family on meeting Callum’s needs. It said that as of March, some 22 whole time equivalent physiotherapy staff were working in primary care services in Sligo and Leitrim.