New IRA believed they were confronting ‘incursion by crown forces’ 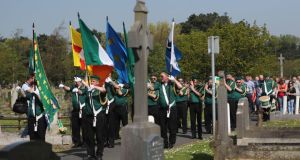 Flags are flown during the Saoradh Easter commemoration at Milltown Cemetery in Belfast on Monday. Photograph: Niall Carson/PA Wire

The New IRA, one of whose members is believed to have killed journalist Lyra McKee in Derry last week, believed it was resisting an “incursion by crown forces” when it carried out the gun attack, the chairman of Saoradh has said.

Brian Kenna was speaking after more than a hundred members and supporters of Saoradh, a self-styled revolutionary party, paraded to the republican plot in Milltown Cemetery in west Belfast on Monday.

The 29-year-old journalist was shot as she stood with other bystanders watching rioting in the Creggan area of the city last Thursday night. She was standing near a police vehicle and was fatally wounded.

The Police Service of Northern Ireland (PSNI) have said they believe dissident republican group the New IRA was responsible for her murder.

The parade at Milltown Cemetery was led by a colour party of members wearing black trousers, white shirts, black berets and sun glasses, who were in turn led by a band.

There was a low-key PSNI presence outside the cemetery during the parade while a police helicopter flew overhead recording events.

Mr Kenna, who is chairman of Saoradh which is said to reflect the thinking of the New IRA, said the killing of McKee in the Creggan on Thursday night as she was observing people rioting against the PSNI was “tragic”.

“If the IRA were involved, if they fired them shots then a mistake was made and they should apologise for that,” said Mr Kenna. He said that Saoradh was a standalone organisation that “had no hand, act or part” in McKee’s murder.

If the New IRA was responsible it should acknowledge “what was a very tragic incident”, said Mr Kenna.

“We also say that the PSNI also have to bear a huge level of responsibility too because they came into a nationalist area late at night [and] provoked the crowd,” he said.

“There had been rioting in the area the previous three nights. The police were driving in the area antagonising young people and drawing them out into the streets,” he added.

The PSNI said it was carrying out searches for dissident guns and explosives at the time.

Mr Kenna said if police wanted to conduct a raid based on intelligence-led information “well perhaps they should have done that at six o’clock in the morning when there would be no young people on the streets”.

He added that he did not believe “for one second” that the New IRA intended to kill McKee. “I would tend to believe that the IRA believed they were attempting to confront an incursion by crown forces,” he said.

Saoradh cancelled its Easter Rising commemoration parade planned for Derry on Monday after the killing of McKee although it did hold a parade in Dublin on Saturday, with some of its members marching in paramilitary garb.

Asked was it not inappropriate to hold the Milltown parade in the context of McKee’s killing Mr Kenna said, “The Free State government in Dublin had a commemoration at the GPO on Easter Sunday to commemorate the 1916 Rising. We are republicans and we have every right to commemorate the men and women of 1916.”

Dubliner Mr Kenna, who served two periods in prison for IRA activity and membership, said that in “every generation of the Irish struggle you will have a reaction to the armed occupation of our country”.

“This happens in every generation of the Irish struggle. It won’t change until partition is removed and the occupier, the armed British forces, leaves our country,” he added.

Mr Fennell said Saoradh was conscious of how close the parade was o “Lyra’s tragic death but at the same time we thought it was appropriate to hold something very small-scale and to commemorate in a very dignified and fitting way” the Easter Rising.