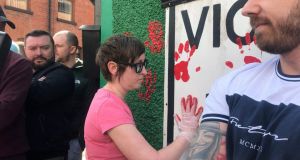 More than 140 people have so far contacted police in Derry seeking to pass on information about the murder of journalist Lyra McKee in the city last Thursday, the Police Service of Northern Ireland (PSNI) has said.

Ms McKee (29) was shot during rioting in the Creggan area on Thursday and died shortly afterwards. The PSNI believe dissident republican group ‘the New IRA’ was responsible.

Det Supt Jason Murphy, who is leading the investigation, said there had been “a massive public positive response” to the enquiry with more than 140 people providing information via the PSNI’s major incident public portal.

Two males aged 18 and 19 were arrested on Saturday as part of the investigation, but have since been released.

“This was an attack on the community. Lyra, tragically, was a random victim and I need the public to continue to support us,” he said in a statement on Monday night. “My challenge is, how do I convert that community intelligence and information into raw evidence that allows me bring offenders to justice.”

Police are carrying out house-to-house enquiries and Det Supt Murphy urged those with information, including those who feel scared about doing so, to “please, come forward and have a conversation with me”.

“I want to reassure people that you don’t have to commit to anything today. I just need to speak to people to understand what they know,” he added. “We can then look at how we capture that information in the best way possible to protect those witnesses and enable me to bring the gunman who killed Lyra McKee to justice.”

The police are to ask the North’s Public Prosecution Service (PPS) if additional protection – such as giving evidence from behind screens – could be offered to witnesses.

Protesters and friends of Ms McKee gathered on Monday in Derry’s Bogside outside Junior McDaid House – an office used by a number of dissident republican political groups including Saoradh, a self-styled revolutionary party which is said to reflect the thinking of the New IRA.

A friend of Ms McKee’s, supported by about 10 others, opened a tin of red paint and protestors began to daub red handprints on the wall.

“That’s the blood on their hands,” said Ms McKee’s friend Sinead Quinn in reference to the dissidents.

They were watched in silence by about 10 men who had emerged from the office, as well as by about 50 bystanders who stood further back. A number of police were also present.

“This is for Lyra”, one of the protesters shouted as she printed her handprint on the wall, and was cheered by those watching.

“We’re strong women,” said Ms Quinn. “People have been afraid to stand up to people like this. We are not afraid.”

Others shouted at the men standing outside: “Murderers. Get out of this town. Nobody wants you.”

Ms McKee’s friend, Kathleen Bradley, said the funeral would be a “celebration” of the journalist’s life.

“That’s what Lyra would have wanted. The dress for it is not sombre black and white, it’s Harry Potter, it’s the characters from Marvel, so hopefully it will be as happy an occasion as it can possibly be given the circumstances.”