Moore Street traders may shut up shop after 200 years

Licence holders consider ‘exit’ from market over criminality and neglect 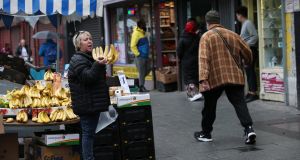 Moore Street in Dublin: a document signed by 17 traders, indicating that they wish to exit their licence agreement, has been sent to Dublin City Council. Photograph: Laura Hutton

Dublin’s 200-year-old Moore Street market could be consigned to history following indications from traders that they are prepared to shut-up shop.

A document entitled “Licence holders who wish to be considered to exit the market” signed by 17 traders who hold casual trading licences to operate on Moore Street has been sent to Dublin City Council.

Assistant council chief executive Dick Brady, who has responsibilty for casual trading, said the 17 signatories correspond with the number of licence holders on the street.

A recent report from the Government-appointed Moore Street Advisory Group highlighted the decline of the markets, citing a lack of facilities such as toilets and problems with antisocial behaviour and criminality, including drug dealing, illegal cigarette selling and assaults.

In August, the council closed the Victorian-era indoor fruit and vegetable market on nearby Mary’s Lane, paying compensation understood to be in the region of €5 million to the wholesalers operating there. 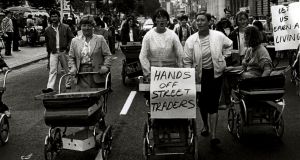 However, Mr Brady said those traders had property leases and the same legal rights do not apply to casual trading licences.

“Casual trading licences last for one year only and can be suspended by the council as necessary. They are not leases on property, they are licences to trade on a particular site on a public street and there is no compensatable interest attached to them,” he said, adding that the letter from the traders had not been accompanied by any request for compensation.

Independent Dublin Central TD Maureen O’Sullivan, who sent the document to the council on behalf of the traders, said they were seeking a meeting with the council to determine their future. “There is no doubt they are in dire straits at the moment and a frank and open discussion is needed immediately in relation to their future,” she said.

In addition to the neglect of the market and crime on the street, the proposed development of its east side by UK property group Hammerson would inevitably cause difficulties for the traders, she said.

“When development starts it is likely they will not be able to continue trading for a considerable period. They need to know what their options are, whether that’s a suspension of their licence or if it would be preferable to consider relinquishing their licences.”

Fruit and vegetable seller Tom Cullen said Moore Street market was being deliberately neglected by the council. “If the street was cleaned up, we would stay here, but we are being completely ignored and dumped on.”

Moore Street trader Margaret Hanway said the council had repeatedly claimed it had no money to upgrade the market. “We asked for proper street lights, they say they have no money, but they can find €5 million for the people in the market?”