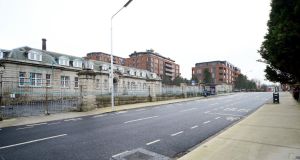 Computer-generated image of part of the apartment scheme that was planned beside the former Smurfit printworks at Daneswell, Glasnevin

Developers of the old Smurfit printworks in Glasnevin, Dublin, have failed in a third attempt to build apartments instead of houses on the site.

Earlier this year Kieran Gannon’s Scanron applied for a Strategic Housing Development of almost 300 apartments at the site.

The company was granted permission in 2016 for 43 houses and 76 apartments at the site of the former printworks close to the National Botanic Gardens, now called Daneswell.

However, after completing 35 houses, with price tags of up to €1.25 million, it sought “fast-track” permission from An Bord Pleanála for 299 apartments instead. The new scheme would include a nine-storey block.

Permission for a larger scheme of 147 homes including 66 houses, 14 duplexes, and 67 apartments up to six storeys tall was refused in 2014 on the grounds of excessive height. The application for the nine-storey scheme followed the removal last December by Minister for Housing Eoghan Murphy of the cap on building heights in the city.

In June the board refused permission due to the “design, scale and massing of apartment buildings” and their potential effect on the newly built houses.

Following the board’s refusal, the company sought permission from Dublin City Council for an amendment that would see 10 proposed houses replaced by 28 apartments in three-storey blocks.

The development would also “seriously injure the residential amenities of property in the vicinity and set an undesirable precedent for similar developments in the area”.

Former Green Party MEP Patricia McKenna, who lives nearby, had objected to the application, saying that replacing “potential family homes” with apartments would increase the likelihood of a “transient population” in the development.

The existing planning permission for the site, which remains live, was granted in 2016, before the introduction of the Strategic Housing Development scheme,which allows applications for more than 100 homes, or blocks of 200 student bed spaces, to be made directly to An Bord Pleanála.