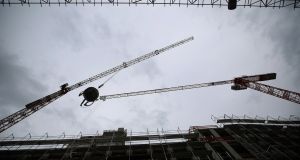 One of Ireland’s most senior planners has urged public representatives to be more “responsible” in their approach to high-density housing and resist “nimby” attitudes to sustainable developments.

Rachel Kenny, director of planning with An Bord Pleanála, said the National Planning Framework and its goals of making towns and cities more environmentally and social sustainable “may be eroded” by a lack of commitment from elected representatives.

Speaking in a personal capacity, and not in her role with the board, Ms Kenny, who will this week become the first female fellow of the Irish Planning Institute, called for a “more open-minded attitude” to strategic housing developments (SHD).

New figures show that to the end of last month An Bord Pleanála had granted permission for 67 SHD schemes, including co-living and build-to-rent developments.

Permission was granted in almost three-quarters of decisions made by the board. About half of all large-scale housing applications were refused before the SHD system was introduced.

Under the SHD system introduced two years ago to speed up the delivery of housing, applications for schemes of more than 100 homes, or blocks of 200 student bed spaces, are made directly to the board, bypassing the local authority decision phase.

In 2018, the first year the scheme was fully operational, the board granted permission for 27 developments of 7,102 houses and apartments and 4,479 student bed spaces. In the first eight months of this year, the board approved 40 applications, for 9,070 homes and 3,094 student spaces.

Of a total of 92 applications decided, the board approved 67. However, the majority of these schemes have met with strong local opposition.

“There is a price to pay for sustainability and for having a lower carbon footprint and that hasn’t quite taken hold yet, but that price is higher densities and in some cases higher height,” Ms Kenny said.

The public and local political reaction to high-density developments was “worrying” she said.

“The board is accused of ignoring the local desire for lower-density housing or ignoring the local politicians in what they think is appropriate for an area, and I find it a concerning element that the public representatives in some areas are not really being as responsible or as accountable as they could be,” she said.

“I would like to see the elected members be more open-minded, not just in principle but in practice, to take a more forward-thinking role.”

SHD developments and taller buildings were encountering less resistance in city centres, particularly in Cork, where higher-density developments have been “embraced in a more meaningful way” than elsewhere, she said. However. a “nimby” attitude remained in other towns and in suburban Dublin.

“There is a nimby or ‘not in my area’ attitude in the suburbs of Dublin, because there are predominantly three- and four-bed, two-storey semis, and it is jarring for people,” she said.

“But we do need to change the way we talk about high density so we are not frightening people. You can get 42 units per hectare with three-storey terraced housing, so there is a education piece we need to promote.”

The SHD system was due to remain in place until the end of this year. However, its proposed retention is currently under review and a decision is due next month.