Miriam Lord: Another Soliloquy on Merrion Street, but there was a daring twist 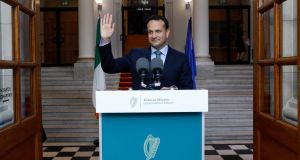 This time Leo addressed the nation from the bottom of the stairs. And he skipped the poetry. Photograph: Leon Farrell/Photocall Ireland

There was something missing in the polished cameo shot with the camera trained on Leo alone. And it wasn’t the poetry.

It was the slogan.

Even though it wasn’t there, we could see it in the mind’s eye as a Taoiseach in possession of no government showcased his statesmanship in front of an audience of the people. There, in neat general election letters, above his head.

This was what Friday evening’s big speech was all about. Complete with a roadmap and the undivided attention of a worried nation anxious for guidance and reassurance.

Varadkar delivered this in the process of confirming his Government’s comprehensively leaked decision that the Covid-19 restrictions are to continue for two more weeks, with just a few minor changes. However, there is a plan to gradually unwind the shutdown in a series of stages, in a sensible way.

Hard to argue with that.

“Reopening Ireland”. From the people who brought you “Project Ireland”.

They know their way around a plan; they have managed the lockdown very competently and now seem best poised to unwind it. Leo Varadkar sold it very well during his latest address to the nation.

If he can deliver on the roadmap, and the shaky-looking government formation talks hit the buffers, it could be just the ticket to a new term.

This speech marked a radical departure by the Taoiseach.

Did ideas man John Concannon accidentally drop The Heaney Book down the back of a radiator?

Yes, he was still front and centre in the grandeur of Government Buildings, with the showy accoutrements of State positioned around him. Still standing tall in the middle of the picture looking all handsome and leaderly.

But here’s the daring twist: this time Leo addressed the nation from the bottom of the stairs. Last time, he impressed us hugely from the Serious Corridor upstairs.

High-fives all round for smarts.

Of course, the absence of poetry was noted. Did ideas man John Concannon accidentally drop The Heaney Book down the back of a radiator? Or maybe the speechwriter was still sulking because Labour’s Alan Kelly quoted Eavan Boland, who died this week, in the Dáil on Thursday, thus stealing a march.

Whatever. This was of no real interest to working journalists, who hung around Leinster House all day wondering when they would be informed of a time and place for the unveiling by the Taoiseach of his much-trailed Covid Lockdown Exit. They really wanted to ask him questions about it.

But they couldn’t because Leo’s people decided it was time for another Soliloquy on Merrion Street. At least the hacks were able to recite most of the lines along with him because they were comprehensively leaked well before he opened his mouth.

Although, to be fair, the Taoiseach would be going on The Late Late Show a few hours later, there to be eviscerated by Ryan Tubridy along with the other light entertainment acts offering themselves up for Friday night slaughter. And you can’t say braver than that.

The unwinding will take part in five stages at three-week intervals. Here, the Taoiseach signalled the numbers by quickly unfurling his fingers, just like the host of an old, incomprehensible game show called 3-2-1, in which the co-star was “Dusty Bin”.

The biggest news from Government Buildings was that “the over-70s will be allowed out”. What happens after that is anybody’s guess. They might wreck the gaff. Just as well the pubs will remain closed. Along with DIY shops and garden centres, which will have to wait a few weeks longer while the big supermarkets buy in new stock and take all their business.

We hear the Taoiseach and members of his cabinet were overjoyed when told the exit strategy would involve “five stages” and there was terrible disappointment when the news was broken that these were not actual stages, for performance purposes.

Two more weeks of tight restrictions should be doable, when the outcome means the safety of family members and fellow citizens.

“Not long from now, some summer night, we will see our friends again,” mused Leo, waxing slightly poetic. Wistfully.

He mentioned the “10,000” or so letters he has received in recent weeks. Who knew so many people feel compelled to write to the Taoiseach with their thoughts and dreams and problems and desires?

Tight restrictions? We know all about them after weeks of flattening the curve. Another two shouldn’t make much difference at this stage when the future looks elastic.

Never mind. The Fianna Fáil leader, stuck in the Leinster House carpark, mentioned them. Leo stole his thunder in every other department – it’s difficult for Micheál to stay relevant. Micheál’s backdrop was of the railings in front of the National Library and a fella wheeling his bicycle past the camera. Not a patch on the flags and pillars and marble staircase of Government Buildings.

Meanwhile, Sinn Féin’s Mary Lou McDonald was also canvassed for her opinion on TV after the Taoiseach’s performance. Her backdrop was even gloomier, in a darkened room in front of a black-and-white portrait of Countess Markievicz.

Meanwhile, the man in possession of no government but still firmly in charge told the nation that their effort so far “has been worthwhile. It is working. So let’s finish what we started.”