Arlene Foster: ‘It’s not just about north-south but also about east-west’ 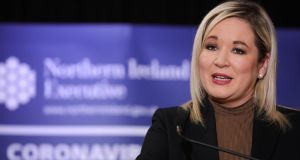 Speaking at the Northern Ireland Executive’s daily media briefing on Friday, Michelle O’Neill said they had “talked about exit and recovery and how we can move at similar times given that the disease is obviously spreading at a similar way across the island.” Photograph: Kelvin Boyes/Press Eye/PA

A co-ordinated approach to exiting lockdown on the island of Ireland has been discussed between the governments in both jurisdictions, the North’s Deputy First Minister has said.

Speaking at the Northern Ireland Executive’s daily media briefing on Friday, Michelle O’Neill said they had “talked about exit and recovery and how we can move at similar times given that the disease is obviously spreading at a similar way across the island.”

However the First Minister, Arlene Foster, said there was a need “not just to have a north-south approach to what is going on but also an east-west approach.

“I’ve always believed that the totality of relationships are important in relation to tackling this virus and that will continue to be my view,” she said. “It’s not just about north-south but also about east-west.”

Asked by The Irish Times if she would advocate an all-Ireland approach regardless of her own political views, the Democratic Unionist Party (DUP) leader said she had always been “very clear that this is not a political issue, this is an issue about saving lives.

“That’s always been the modus operandi of the Executive,” she said, “and certainly for me in terms of the way forward.”

A further 18 coronavirus-related deaths were announced by the North’s Department of Health (DoH) on Friday, bringing the total number of hospital fatalities to 365.

The figures include four deaths within the past 24 hours as well as confirmation of a further 14.

However data released earlier on Friday by the Northern Ireland Statistics and Research Agency (NISRA), which records deaths in all settings including care homes and hospices, showed that the number of fatalities is at least one-third higher than the figure reported daily by the DoH.

The Northern Executive is to publish its “pathway to recovery” next week, which Ms O’Neill said would set out a criteria-led rather than calendar-led approach to emerging from lockdown.

It is not yet clear what precisely this might entail, though it is expected to outline a graduated approach to easing restrictions, with Ms O’Neill warning on Friday that “there will be no single turning point, there will be no sweeping changes to the regulations, but we also understand that people want to see light at the end of the tunnel.”

The Tánaiste, Simon Coveney, and the Secretary of State, Brandon Lewis, chaired a conference call to discuss the response to the coronavirus pandemic with the North’s first and deputy first ministers and both health ministers on Thursday.

In a joint statement afterwards, they said they had been “agreed that it will be essential to maintain strong North/South collaborative arrangements and, wherever possible, consistency of approach.”

On Friday, the First Minister, Arlene Foster, said it had been a “useful conversation” and they had discussed sharing information, adding that it was “critically important” both jurisdictions continued to so.

There have previously been tensions within the Northern Executive over whether to follow London or Dublin in tackling the coronavirus pandemic.

Health is a devolved matter, and Ms Foster has previously said Northern Ireland could exit from lockdown under a different timetable to the rest of the UK.

The North’s chief medical officer, Dr Michael McBride, said earlier this month there was a “noticeable difference” in the way the virus was behaving in the North as compared to other parts of the UK.

Though it was “early days”, he said, the behaviour of the virus “was more similar to that in the Republic of Ireland.”

This was down to a range of factors, including the public’s adherence to the social distancing and public health guidelines and lower population density.

In April a Memorandum of Understanding was agreed between North and South which recognised a “compelling case for strong co-operation, including information-sharing and, where appropriate, a common approach to action in both jurisdictions.”