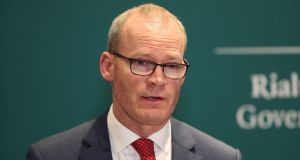 Simon Coveney’s intervention was being interpreted by some as pulling the carpet from under the other parties. Photograph Nick Bradshaw

The timing of Simon Coveney’ interview where he expressed some doubts about the feasibility of a 7 per cent emissions target has come at a critical moment in the government formation process.

As the Greens’ parliamentary party meets on Friday evening for its third straight day of discussions on entering government, the Tánaiste’s intervention was being interpreted by some as pulling the carpet from under the other parties.

His spokesman was quick to point out that Coveney had never said the Greens could “forget” about 7 per cent (if it seriously affected farming). However, the thrust of his comments - and strong negative sentiments about the ambitious target expressed by Fine Gael Ministers of State at a meeting on Friday - was enough to provoke a reaction from the Greens.

The party’s deputy leader Catherine Martin launched a strong criticism of the Tánaiste’s comments on RTÉ radio saying she was “shocked” and “disturbed” by them as she raised doubts about Fine Gael’s sincerity on this ‘red line’ for the party.

Martin is one of the party’s parliamentarians who has expressed most reservations about the Greens entering negotiations with Fine Gael and Fianna Fáil. While others within the party reacted positively to the response sent by Taoiseach Leo Varadkar and Fianna Fáil leader Micheál Martin to its 17 ‘asks’, she and several others have remained dubious about such an arrangement.

As was clear from her comments to RTÉ’s Seán O’Rourke on Friday, the objections extend beyond the big ‘red line’ issues of climate change and transport reductions (which are the ones which will be subject to most negotiations, if it happens).

“Alarm bells are also ringing for us when it comes to the provision of public housing and public land, they seem to want to pursue the private housing model still, what lessons have been learned there? Direct provision, it’s much more than the seven per cent. It’s key social issues,” she told O’Rourke.

There was some clarification from the Fine Gael side on what Coveney said and did not say, explaining it did not depart from the views expressed in the letter sent by Varadkar and Martin earlier this week.

But both leaders were very careful to say that seven per cent could be explored. Now, a figure at the top of Fine Gael was more or less saying we are not ruling it out but is it really realistic? The clarification on the word ‘forget’, in the context seemed a little Jesuitical.

There’s mistrust to be sensed here. Some in the Greens do not trust Fine Gael’s motives and do not believe it is sincere on the 7 per cent target or on other of the 17 Green asks. And Fianna Fáil has also niggling doubts about Fine Gael’s motions. Some in the party take the view that the present caretaker arrangement - whatever its iffy constitutional status - suits Fine Gael just fine and it’s in no hurry to form a government. It is true that Fianna Fáil is keenest to form the three-party coalition because it knows it runs out of choices after that, unless Martin’s leadership is brought to an end.

It suspects that Fine Gael is hedging its bets, stringing others along while leaving the possibility of an election open. It is true that the underlying conditions at the time of the General Election have been usurped and Fine Gael’s fortunes have been reversed since then. Fianna Fáil does feel a little besieged. Its air-raid sirens began to wail deafeningly when Varadkar said it could be the middle of June before a government was formed, a surefire sign that Fine Gael was in no huge rush.

It is true he mentioned an election. But when conceivably would it be safe to hold an election? The autumn? The winter? Next year? A caretaker government continuing on indefinitely would be intolerable, not least because it would be no legislative powers, nor any constitutional authority.

So will today’s latest twist colour the Greens response? Few within the parliamentary party expect a definitive response on Friday, with predictions it could be early next week before a decision is reached. While the parliamentarians seems to be tilting toward negotiations, they are also keen to avoid a split. It is expected that it will come down to a vote, with a two-thirds majority required to proceed.

Paradoxically, the decision could also determine the future of Eamon Ryan as leader. Despite being the person who has taken the party back from zero to its current lofty position, some within the party see his position as vulnerable. He has been to the forefront in arguing for negotiations and if the parliamentary party reject those, it will have repercussions for his standing. The party’s leadership is up for renewal or change in June and if the party decides to go into opposition without negotiation, he could face challengers.