The Irish Times view on reopening society: Solidarity in a time of trauma 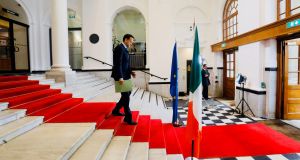 Taoiseach Leo Varadkar confirmed on Friday that the lockdown will not be eased for at least another two weeks. Photograph: Leon Farrell/Photocall Ireland/PA Wire

In a parallel reality – one in which this and previous Irish governments had made different choices – we would now be exiting the lockdown. In fact, we would not have needed to adopt that blunt instrument in the first place. In this alternate universe, our world-class public health system gave us the same intensive care capacity as Germany or Austria, greatly reducing the risk of our hospitals being overwhelmed. Our humane and publicly-funded approach to care for the elderly – and for their carers – ensured that our most vulnerable faced no greater exposure to the deadly coronavirus than any other citizens.

We learned lessons quickly. Seeing the Covid-19 crisis take hold in China in January, the State mobilised long before Italy lost control of its epidemic. Like in Austria, we moved swiftly to limit social interaction and restrict travel. Like South Korea, we grasped quickly that the key to containment was the test-and-trace model. We learned from Asia that quarantine was a vital tool. We realised early on that face masks were essential in limiting transmission. We also bulk-bought PPE, but only as a precaution; our early action meant we didn’t need most of it. In this parallel world, Covid-19 never took hold. Deaths on a large scale were averted. Jobs and livelihoods were saved.

That’s the world we can only imagine. In the one we inhabit, we have had more than 20,000 confirmed cases in the State, and almost 1,200 deaths. On a per capita basis, that death rate is one of the highest in the world. We have mass unemployment, companies are collapsing, economic life is at a standstill. And, as Taoiseach Leo Varadkar confirmed on Friday, the lockdown will not be eased for at least another two weeks.

This is not an exercise in wishful thinking or hindsight. The point is not that Government should have seen what was coming. Nor that it should have been expected to get everything right. Our nearest neighbour reminds us daily that some countries have performed far worse. But it would be absurd to think that the severity of national outbreaks is unconnected to political decisions and societal choices. Some are long-standing, such as the way we choose to structure and fund our health service or care for the elderly, and others more immediate.

In the circumstances, an extension to the lockdown was inevitable. To throw away our gains now would be unconscionable – and, for many people, fatal. But while the public have a big part to play by abiding by the restrictions, only the Government can ensure we have sufficient testing capacity, adequate protections and supports for care homes and the ability to hunt down the virus as and when it emerges. In their remarkable social solidarity, the public are also placing faith in the State. It can repay that faith by ensuring the country to which we re-emerge is in the best possible shape to hold the virus at bay.

1 Operator rejects claims by Dr Tony Holohan that car parks are full
2 BOI customers to be charged twice with bank fees on New Year’s Eve
3 Irish designer of Oxford vaccine: ‘I’ve never worked so hard in my life’
4 Coronavirus: No further deaths and 252 new cases reported, lowest daily figure since September
5 Somebody needs to explain sovereignty to Johnson before it is too late
Real news has value SUBSCRIBE