Before lockdown, gridlock was normal as visitors flocked to picturesque Ballycotton 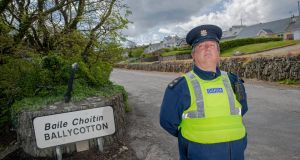 What a difference a day – or, in this case, six weeks – makes. Just ask Garda Mick O’Brien, who became an internet sensation when footage of him directing traffic in Ballycotton went viral.

It was March 22nd, the Sunday after St Patrick’s Day and before the Government announced a complete lockdown. The sunny weather sent hundreds heading for the Co Cork coast.

Ballycotton is a victim of its own success. It’s idyllic, it’s scenic, it has nice cafes and pubs

The picture-postcard seaside village of Ballycotton, long popular with daytrippers from Cork city , found itself inundated with visitors, with many intent on enjoying the spectacular clifftop walk.

But, with traffic grinding to a halt, into the breach stepped Ballycotton’s lone lawman – Garda Mick as he is known locally – to direct cars out of the cul-de sac village and prevent complete congestion.

“Ballycotton is a victim of its own success. It’s idyllic, it’s scenic, it has nice cafes and pubs, and anything else you would want is there, but what kills it is that there’s only one way in and one way out,” he observes.

“On a busy bank holiday, you have people arriving down and fellows are trying to drive up into the village and they can’t see how much traffic is already in ahead and you have residents parking and it becomes a complete bottleneck.

“I was a bit surprised when that footage of me directing traffic went viral. It wouldn’t really be my sort of thing. I’d be a quiet sort of fellow,” chuckles Garda O’Brien as he recalls even his cousins in the UK spotted him online.

Garda O’Brien reckons more than 500 cars may have tried to come into Ballycotton that day. He would normally expect a similar amount to descend on the village for a busy bank holiday weekend but, that was then and this is now.

“Traffic now is nearly non-existent. Cork County Council closing off the cliff walk helped, but people aren’t travelling since the full lockdown kicked in. There’s still the odd person coming out but it’s after calming down hugely.

People are getting sick of staying in and if the weather is good, they’ll be looking to get out

“No one is trying to get down from the city at this stage and the caravan parks never turned on the water or the gas or the electricity, so there is no reason for anyone to come down here.”

Although he may be the only garda in Ballycotton, Garda O’Brien has got good support from his colleagues in the Midleton district under Supt Adrian Gamble and he’s expecting this bank holiday weekend to go off smoothly.

“People are getting sick of staying in and if the weather is good, they’ll be looking to get out so we could have a small bit of business on the checkpoints but it won’t be mad either,” he says.

“The fact it’s one way in and one way out helps. But generally, people are good – they just want it to finish and get on with their lives again and they know that the lockdown and the checkpoints are all part of helping to achieve that.”