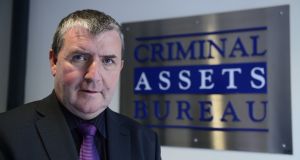 The head of the Criminal Assets Bureau (Cab), Det Chief Supt Pat Clavin, has been promoted to the top ranks in the Garda, at assistant commissioner level.

Mr Clavin was one of three officers to secure promotion to assistant commissioner rank during a recent recruitment competition, along with Chief Supt Ann Marie Cagney and PSNI Det Chief Paula Hilman.

Garda Commissioner Drew Harris announced on Friday that Mr Clavin’s appointment had now been made by the Policing Authority.

“This appointment is very welcome. Pat has 38 years of policing experience across a wide variety of roles and areas in An Garda Síochána,” Mr Harris said.

“His operational and professional standards experience will be of immense benefit to the organisation.”

In his most recent role as head of Cab, Mr Clavin led the bureau’s successful pursuit of Dublin criminal Liam Byrne (39), Crumlin, Dublin. He was named in the High Court as the head of the Byrne organised crime group and a Dublin-based lieutenant of the Kinahan cartel. Some €2.7 million of assets, including property, were seized from the Byrne organised crime group during the Cab investigation into them.

“One thing we find particularly telling is the number of modest homes with bullet proof windows and doors,” Mr Clavin told the Irish Times in an interview just over a year after taking over at Cab.

He said this was a major change compared to the organised crime scene when he joined the force. “When I joined the police in the 1980s we were told there were two crime families in Ireland. One was called the Cahills and the other was called the Dunnes,” he said, a referring to Martin Cahill and brothers Christy and Larry Dunne.

“The Cahills were involved in burglaries and robberies and the Dunnes were credited with bringing heroin into Ireland.”

Under Mr Clavin’s stewardship the bureau established a social media presence and invited members of the public to give the bureau tip-offs online in a bid to modernise its operations and reach out to the public.

While major crime gangs in all regions of the Republic continued to be targeted, the bureau significantly increased the number of gardaí trained to identify unexplained wealth and profile the assets of suspects in their areas.

Those profiles were then passed to Cab’s Dublin offices and hundreds of new investigations were commenced into mid tier criminals from whom cash, vehicles, expensive jewellery and clothing were seized.

That move sought to take full advantage of changes to the Proceeds of Crime Act which was amended to ensure the bureau could target criminal assets valued as low as €5,000 rather than the previous minimum value of €13,000.

Before taking on the lead position at Cab four years ago Mr Clavin worked in senior management posts in the Garda’s Professional Standards Unit and Internal Affairs. He was also previously chief superintendent in charge of the Dublin West Garda division as well as holding the position of superintendent in a number of Garda districts.