‘We should pay attention because assimilation and language-loss is present’ 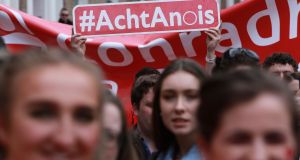 A protester holds a sign in support of an Irish Language Act in Northern Ireland in this photograph of a 2018 protest on Dublin’s Merrion Square. Photograph Nick Bradshaw/The Irish Times

An umbrella organisation representing minorities across Europe was in Dublin on Thursday to present a package of legal proposals aimed at protecting minority languages and cultures in the EU.

Representatives of the Federal Union of European Nationalities (FUEN) were hosted at Leinster House by the Oireachtas Irish Language Committee where they also met with Minister of State for the Irish language, the Gaeltacht and the Islands, Seán Kyne.

The organisation has collected over 1.3m signatures in a petition that calls on the European Commission to adopt the Minority Safepack Initiative, a set of nine proposals aimed at creating an EU standard that would protect minorities, their languages and their cultures.

The proposals include measures such as increased funding for minority communities, the promotion of cultural and linguistic diversity, a single EU copyright law and legislation that would block the exemption of regional or state support for minorities.

FUEN president Loránt Vincze explained the origins of the initiative.

“It comes from frustration with the fact that when members of the European Parliament approach the European Commission and ask them to do something that would benefit minority languages and cultures, the reply has always been: ‘No, it is not possible because it is not a competency of the EU’,” he said.

FUEN organised the petition under the European Citizens’ Initiative which allows citizens to petition the European Commission to consider the adoption of regulatory change.

Once more than 1m signatures are collected across a minimum of seven countries, the commission must consider the proposals before deciding on what follow-up action to take.

Mr Vincze, who is also an MEP and a member of Romania’s Hungarian minority community, said: “The European Union reacts when there is a crisis, when issues are high on the agenda. I think we are in a fortunate situation that there are no conflicts in Europe because of the minority question. We should pay attention because assimilation and language-loss is present. Languages are dying slowly.

“There is nothing on minority rights at EU level and I am confident that we will be able to build something concrete out of our package,” he added.