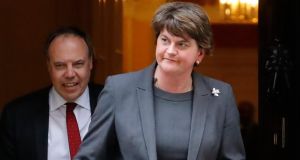 Boris Johnson was “too eager by far to get a deal at any cost” and could have held out for more Brexit concessions from the European Union, the DUP has said.

The DUP, which has been supporting the UK Conservative government, also said one reason for its opposition to the revised Brexit deal is because Northern Ireland could end up diverging from the rest of the UK.

Nigel Dodds, the party’s deputy leader, indicated that its main opposition was based on the issue of consent. The DUP had pushed for, and was denied, a Stormont vote on a cross-community basis on entering the latest arrangements designed to avoid a hard Irish border. Dublin and Brussels believed this amounted to a unionist veto and opted instead for a majority vote.

Mr Dodds claimed this meant “the Irish Government, European and London are agreeing to drive a coach and horses” through the Belfast Agreement.

He said Mr Johnson was so afraid of having to seek an extension to the negotiating period that he made too many compromises. He said it had been proven that the Withdrawal Agreement could be changed but that it should have been altered for the better.

“The Benn Act has forced Boris Johnson into somewhat of desperation measures,” he said, adding that if the prime minister had “held his nerve” he would have won better concessions that “kept the integrity, both economic and constitutional,” of the UK.

👇🏻 “The Democratic Unionist Party will be unable to support these proposals in Parliament.” pic.twitter.com/zcisdSLkPy

However, she expressed concern about the idea of the “rolling consent” mechanism outlined for Stormont.

“What people, what society, what business, what communities need is certainty and stability. I think it is now clearer than ever that the stability we need as an island and as a nation will only be secured with the deal that secures the ending of partition and with a united Ireland.”

Ms McDonald again ruled out Sinn Féin MPs taking their seats in Westminster to take part in a House of Commons vote on the revised Brexit deal.

SDLP leader Colum Eastwood said there is “no such thing as a good Brexit - only degrees of harm caused to economic and political stability on this island”.

“This deal does however meet the minimum requirements to avoid a hard border and the introduction of customs or regulatory checks across this island.”

But she added that a no-deal outcome would be “even more catastrophic than a bad deal”.