Ivor Bell has been found not guilty of soliciting the murder of Jean McConville in 1972, he has been the third person connected with the murder and the Boston College recordings. 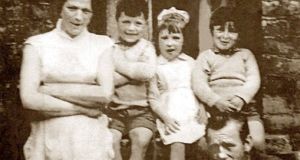 Mother of 10 Jean McConville, who was abducted and murdered in 1972.

Jean McConville was a 38-year-old widowed mother of 10 children from the Divis Flats area of west Belfast who sometime between the end of October 1972 and New Year’s Day 1973 was abducted, murdered and secretly buried by the IRA. The IRA denied killing and “disappearing” her until 1999 when it admitted her murder and the murder of eighth others of the Disappeared. The IRA alleged she was carrying out work on behalf of the British army, a claim rejected by her family. An inquiry by former police ombudsman baroness Nuala O’Loan said there was no evidence to support the IRA allegation. The McConville family suffered a difficult and traumatic life, many of them ending up in care. In August 2003, McConville’s body was discovered on Shellinghill Beach in Co Louth.

What is the Belfast Project, also known as the Boston Tapes?

The project run under the auspices of Boston College and the directorship of journalist and writer Ed Moloney was designed to provide an oral history of the Troubles. Former republican and loyalist paramilitaries gave interviews to the project on the basis of commitments that their names and the interviews could not be released until after their deaths. It transpired, however, that this confidentially commitment only applied in “so far as American law allows”. After legal battles, the US courts handed over tapes which the PSNI requested. There was little public knowledge about the existence of the tapes until Moloney published his book, Voices From the Grave, in 2010. It was based on interviews that the late loyalist David Ervine and the late former IRA member Brendan “The Dark” Hughes gave to the Belfast Project.

Who is Ivor Bell?

Ivor Bell is an 82-year-old former alleged chief of staff of the IRA from west Belfast who as part of the project did a series of interviews with its lead researcher, Anthony McIntyre, a former IRA prisoner. In the tapes he implicates himself and former Sinn Féin president Gerry Adams and the late IRA figure Pat McClure in the killing of Jean McConville.

Early in the Troubles, Bell and Adams, who were in Long Kesh prison together, were close allies. But from the 1980s when the republican movement, particularly after the 1981 hunger strikes, started placing greater electoral focus on Sinn Féin he gradually became estranged from Adams. He argued that too many resources were being diverted to politics from the “armed struggle”.

In Patrick Radden Keefe’s book, Say Nothing, about the murder of Jean McConville, the author reported that Bell plotted to overthrow Adams but that the Sinn Féin leader was alerted to this threat and Bell was “court-martialled”. According to Say Nothing, Bell could have faced an IRA death penalty but Adams intervened on his behalf, with the result that Bell retreated from the movement. Bell did not appear in court as the prosecution accepted he is suffering from vascular dementia.

What is a trial of the facts?

A trial of the facts is a court process that can be held when the defendant is judged unfit to stand trial due to serious ill-health, as was the case with Bell. The trial is to establish if a defendant committed alleged acts – in the case of Bell that he solicited Gerry Adams and the late Pat McClure to murder Jean McConville. Such trials are held in front of a jury while in normal such paramilitary cases they are held in non-jury Diplock courts. In this case, had the trial gone to the jury, it could have ruled that Bell committed the alleged acts or that he was not guilty. Even if it ruled he did the acts, he would not have faced punishment because of his illness.

Who was Pat McClure?

Pat McClure was a senior IRA figure during the 1970s, at one time the intelligence officer for its Belfast brigade, according to Ivor Bell in the Boston tapes. In the tapes Bell said McClure and Adams said she should be killed and secretly buried. Former IRA prisoner Dolours Price, now deceased, said she and McClure and a third person were actually at the graveside when they shot and buried McConville on Shellinghill Beach. Patrick Radden Keefe’s book, Say Nothing, alleges that the third person was Price’s sister, Marian, who is still alive. Her solicitor has denied this allegation. Late in the 1970s or early 1980s, McClure withdrew from the IRA and, with his family, moved to Connecticut in the US where he worked as a guard at the Cheshire Correctional Institute, a high security prison. He died in 1986.

13 more deaths and 2944 cases of Covid reported by Nphet