Ministers to go abroad for St Patrick’s Day despite Brexit

Government believes the ministerial visits are more important than ever 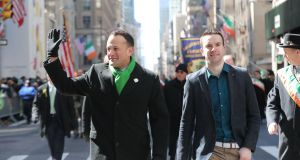 The Government is to forge ahead with plans to send Ministers abroad for St Patrick’s Day visits in March, even though it may be forced to pass emergency Oireachtas legislation to cope with a no-deal Brexit.

Despite pressures at home, the Government believes it is more important than ever to go ahead with ministerial delegations given Brexit, arguing that Ireland must expand its global footprint and develop new markets.

Former Fine Gael taoiseach John Bruton backed the move, saying the days around St Patrick’s Day are ones in which “people think about Ireland and do so in a positive way all over the world”.

“It provides an opportunity to remind people all over the world about a modern Ireland at a time when they are willing to listen. I know it is around two weeks before Brexit would occur but it would be very strange to stop doing something we have done for many years.”

A final list of locations is being drafted. Last year, the Taoiseach, Leo Varadkar, Tánaiste Simon Coveney, 29 Ministers, the Chief Whip, Attorney General, the Ceann Comhairle and the Cathaoirleach visited 92 cities across 38 countries.

This year’s visits would give Ministers the opportunity to explain the post-Brexit landscape, and how Ireland would be affected, or able to benefit from it, said Kevin Sammon, the Industrial Development Authority’s head of communications.

“It is a big opportunity to set the record straight in markets across the world about what exactly is going to happen in Ireland in relation to Brexit. There is confusion in many places about what will happen. It is an opportunity to talk about our continued EU membership,” he said.