Ministers warn nurses’ row must be resolved within current agreement 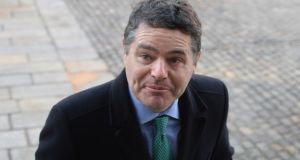 Minister for Finance and Public Expenditure and Reform Paschal Donohoe has ruled out the establishment of a judge-led commission to review the nursing and midwifery professions.

He said nursing unions were effectively looking for a 12 per cent wage increase, and “the challenge in meeting that is too great inside the current wage agreement”.

Mr Donohoe told the Dáil that if a commission was established every other sector of the public service would want a similar body established.

He highlighted the scale of the industrial action, and said its timing was “designed to maximise the impact it would have on patients, and all of this at the very time we are facing such a risk to our economy”.

The Minister was speaking during a Fianna Fáil private member’s debate which called for the establishment of a commission which would review pay, conditions, recruitment and career paths.

The motion also calls for the Government to engage with the INMO (Irish Nurses and Midwives Organisation) and Psychiatric Nurses Association (PNA) who plan to stage a series of 24-hour work stoppages over claims by nurses for pay party with other degree-level grades such as physiotherapists.

Minister for Health Simon Harris earlier told the debate the issues had to be resolved within the parameters of the current public sector wage agreement in place until 2020.

Mr Harris has expressed confidence that strike action by nurses and midwives can be avoided even though contingency plans are being drawn up for such an eventuality.

Mr Harris warned that the proposed industrial action was a “no-win scenario if it proceeds”. It “jeopardises the promise of increased supports for new nurses and midwives entering our health system that will continue to grow and develop in years to come”.

And he said “it puts in danger the great progress we have made as a Government in recent years to improve pay conditions within the nursing and midwifery professions”.

The Minister said he knew it was a decision the INMO and the PNA did not take lightly to stage a series of 24-hour work stoppages over claims by nurses for pay party with other grades such as physiotherapists.

Members of the unions were in the public gallery when Mr Harris told the Dáil he remained committed to work to try and find a solution “but it has to be a solution that honours the integrity of the public service pay agreement that unions signed up to”.

Fianna Fáil health spokesman Stephen Donnelly said strike action was “something they have been forced into by a Government that does not listen and appears not to care”.

However, Mr Harris accused him of “breathtaking” revisionism. He said that five months ago Mr Donnelly told the Oireachtas Health Committee that nurses“are among the best paid in the world”, and that relative to private sector new entrants nurses were “very well paid as new entrants”.

“Working within the agreement for a solution is a prudent approach to take,” the Minister concluded.