Brian Crowley is expected to step down from European Parliament 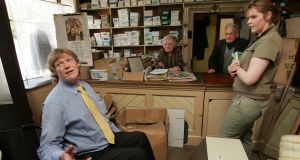 Ireland South MEP, Brian Crowley is strongly expected to confirm on Thursday that he will not be standing in this year’s European elections, paving the way for a number of Fianna Fáil hopefuls to seek the party’s nomination.

Mr Crowley (54) topped the poll in the 2014 European elections for Ireland South when he won 180,329 first preferences to take the first seat on the first count. He is scheduled to announce his political intentions at a press conference scheduled for 1pm in Cork today.

Although Mr Crowley and his spokesman have remained tight-lipped about his political intentions, The Irish Times has learned that Mr Crowley will say he is stepping down from the European Parliament on health grounds.

It’s understood Mr Crowley, who was paralysed from the hips down when he fell from a roof at the age of 16 and has been a wheelchair user ever since, has been advised that medically it would not be advisable for him to run for the European Parliament.

Mr Crowley missed much of the last two years of the 2009-2013 European Parliament sittings. He told the Irish Examiner in July 2013 that debilitating leg sores had resulted in him having to be hospitalised for months at a time.

However, he recovered to contest the 2014 European Parliament elections, when he maintained a trend going back to his first European election in 1999, where he topped the poll, but ill health prevented him from attending parliament.

According to VoteWatch Europe, a think tank that tracks parliament votes and actions, Mr Crowley’s voting record ranks 751st out of the 751 MEPs in the current parliament and he is expected to address his non-attendance in parliament at his press conference.

Mr Crowley has been entitled to a monthly salary of €8,484.05 as an MEP as well as a €4,342 monthly expenditure allowance to cover office rent and constituency activities, and he has maintained a constituency office over the past five years despite not being able to attend the European Parliament.

Fianna Fáil senior figures expressed doubt that Mr Crowley would have got the party nomination had he sought it.

“I would think he would find it tough enough to command sufficient support at convention to get the nod,” said one source, who said he was surprised by Mr Crowley’s decision to step down given the invite to the press conference made extensive mention of his impressive record as a vote getter.

A second Fianna Fáil source said he didn’t believe there was “any great appetite within the party for Brian to run”.

“I don’t think Brian could credibly go forward for us as a candidate, but everything we are hearing is that he is not going to go forward so the issue is unlikely to arise,” he said.

Shortly after his re-election in 2014, Mr Crowley announced he was leaving the liberal ALDE (Alliance of Liberals and Democrats for Europe), of which Fianna Fáil is a member, and moving to ECR (European Conservatives and Reformists Group), a Eurosceptic group set up by British Conservatives in 2009.

It’s understood the move annoyed Fianna Fáil leader Micheál Martin but he refrained from moving against Mr Crowley despite being urged to do so by Mr Crowley’s substitute on the Fianna Fáil ticket, Kieran Hartley of Waterford.

Last year Mr Hartley was severely critical of Mr Crowley, saying he was “not interested in representing the people of Ireland South – it’s all about Brian Crowley”, as he argued that voters in Ireland South were disenfranchised by Mr Crowley’s non-attendance in Europe.