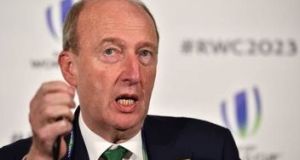 Minister for Transport Shane Ross. A Minister said Mr Ross’s public performance was not surprising given that he did not seem ‘up to speed’ on Brexit preparations in his own portfolio.

Ministers have been privately scathing about the performance of Minister for Transport Shane Ross at a press conference this week where he suggested that checks would be needed on the Border after Brexit.

At the event Mr Coveney quickly contradicted Mr Ross when the Dublin Rathdown TD said he expected checks on the Border if the UK exited the EU without an agreement.

In a tape of a private conversation between the pair just as the press conference ended, Mr Coveney is heard telling Mr Ross: “Once you start talking about checks anywhere near the Border people will start delving into that, and all of a sudden we’ll be the Government that reintroduced a physical border on the island of Ireland. ” The Tánaiste also said border checks “could be at sea”.

As well as the private exchange, Government sources also expressed surprise at Mr Ross’s handling of a number of questions from journalists.

Mr Martin said the Government “must be honest with the Oireachtas and the people” on the potential impact of a no-deal Brexit on Ireland’s politics, economic potential and social well being”.

The Government has consistently claimed it is not preparing to introduce a border between Northern Ireland and the Republic in any circumstances – deal or no deal.

One Minister denied that Mr Ross was spelling out what the Government privately believed but does not want to disclose to the public.

“It is not as if it was said in Cabinet and he was telling the truth,” said one Minister. “It was as if he didn’t even read his own documents.”

The Cabinet this week approved memos from Mr Ross, Mr Harris and Mr Coveney on no-deal preparations in the areas of transport, health, the common travel area and how to get no-deal legislation though the Dáil.

“This whole idea that, ‘oh, he is telling the truth’ is not correct,” the Minister added.

Another said Mr Ross’s public performance was not surprising given that he did not seem as “up to speed” on Brexit preparations in his own portfolio that were expected.

Government sources also expressed sympathy for the officials in the Department of Transport because of what was described as Mr Ross’s failure to adequately lead and oversee his department. “He wants to be Minister for Justice,” one source said.

A spokeswoman for Minister Ross said the criticisms were sparked by his drink driving measures.

“A handful of unnamed TDs from all parties have been spooked by the successful enforcement of the drink driving measures In recent weeks and are using any excuse to retaliate under the cloak of anonymity.

“Lives are being saved and will continue to be. The Minister will not be deterred from pursuing this part of his portfolio.” She added: “Who are these ministers who whisper in the political twilight?”