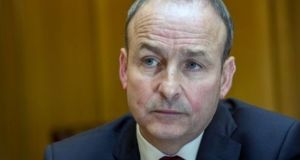 Micheál Martin: “There are people who are unhappy with the stance I’ve taken but there are a lot too who are happy with it.”

Fianna Fáil leader Micheál Martin has dismissed suggestions that his leadership of the party may be under threat because of his decision to come out in favour of repealing the Eighth Amendment.

Several commentators have suggested that Mr Martin may be under pressure for his forthright views on the need for repeal given that he is in a clear minority within the Fianna Fáil parliamentary party where over 30 members of the parliamentary party have urged a No vote.

And rumblings of a possible heave against Mr Martin were given some impetus when some 31 members of the parliamentary party including possible leadership contenders, Dara Calleary and Michael McGrath posed for a photo outside Leinster House to call for a No vote.

But Mr Martin this week played down any suggestion that his decision to come out in favour for a Yes vote and to subsequently campaign in Dublin, Cork and Louth to have the Eighth Amendment repealed would lead to any move against him.

“I think it’s a misreading of the situation to be fair. I think there are many in the general population who are voting No with reservations, they are voting No even though they are not happy with the status quo and I think that applies equally to people within the Fianna Fáil parliamentary party.

“There are people within the parliamentary party who have come to me and said they are voting No but fully understand where I am on this question and support my right to vote Yes. Of course, there are people who are unhappy with the stance I’ve taken but there are a lot too who are happy with it.”

Mr Martin said he believed that Fianna Fáil had paved the way for other parties by allowing members a freedom of conscience on difficult issue such as abortion and he believed that had led to “a far healthier debate “ than might otherwise have been the case.

Mr Martin also revealed that he had received hate mail for his change of position on the issue but he didn’t believe such correspondence was typical of the overwhelming majority of those campaigning for a No vote.

“I have got some vitriol since I declared my position but that would not be unusual with how emotive this issue has been going back over the years – I’ve got some nasty letters but one has to be resilient about this and it doesn’t unduly bother me at this stage of my political life,” he said.

“I often wonder why people go to those lengths because the vast majority of those voting No who are pro-life are sound people as well and they would not approve of that either but there are some ideologues who get very personal about things and start labelling people and calling them names.”