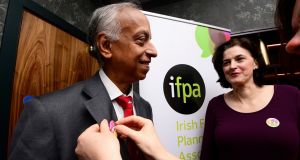 The head of the inquiry into the death of Savita Halappanavar in 2012 has supported a Yes vote in the referendum on the Eighth Amendment “for the sake of women’s health and rights”.

Prof Sir Sabaratnam Arulkumaran, former president of the Royal College of Obstetricians and Gynaecologists and the International Federation of Gynaecology and Obstetrics, addressed a press conference hosted by the Irish Family Planning Association (IFPA) in Dublin on Tuesday.

Mrs Halappanavar died of septicaemia in her 17th week of pregnancy at Galway University Hospital on October 28th 2012.

She had enquired about the possibility of having a termination in the hospital during her miscarriage. The subsequent inquiry into her death found she was inadequately assessed and monitored by her clinical team.

A termination was not offered or considered possible due to the team members’ assessment of the legal context in which their clinical professional judgement was to be exercised.

Prof Arulkumaran, who gave expert testimony to the Oireachtas Committee on the Eighth Amendment last year, said there were views that by introducing or legalising abortion there would be an increase in the abortion rate.

He said the “opposite” was the case. In countries such as Italy, France, Turkey, Switzerland and Finland, the abortion rates had come down after it was legalised because women were also given information on contraceptive use afterwards. Where women travelled to another country and then returned home after a termination, they had no time for counselling and to accept advice on contraception.

“So it’s quite important that you don’t look at it as an isolated problem but as a public health issue,” he said.

Asked whether he was saying that Ms Halappanavar died as a result of the Eighth Amendment rather than as a result of mismanagement of sepsis as claimed by the No side, Prof Arulkumaran said both needed to be taken “hand in hand”.

He said Ms Halappanavar’s condition had not been diagnosed and had escalated.

The second point was that as her condition had escalated, even to the point when her pulse rate was double the normal rate, her team was still looking for the baby’s heartbeat.

“One of the things which was holding their hands back while they were looking after her was this Eighth Amendment issue because the baby’s heartbeat was there.”

Dr Caitriona Henchion, medical director of the IFPA, said there was a well-documented, increasing use of abortion pills from online providers in Ireland. The most recent figures estimated 3,000 requests from the two main providers in 2016.

“The women who resort to illegal abortions are our sisters, our daughters, our neighbours, our friends. All of them are criminalised by our current laws. This means that they do not seek medical support in their decision-making process, and they do not routinely avail of post-abortion care because of fear of criminal sanctions or negative reactions from healthcare professionals.”

Fine Gael TD Kate O’Connell, who was a member of the Oireachtas Committee on the Eighth Amendment, said that in the last few weeks of the campaign there was “a narrative emerging that there’s no need to have a referendum” and that women would be “fixed up anyway” under the provisions of the Protection of Life During Pregnancy Act 2013, enacted following the death of Ms Halappanavar.

Ms O’Connell said a lot of the people saying this had opposed the 2013 Act and they were “the same people who opposed contraception and divorce in the past”.

She said the Government’s proposed legislation on regulating termination of pregnancy, where it applied post-12 weeks, was only in situations where there was a “real and substantial risk to the life of the mother and serious risk to the health of the mother”.

“It is disingenuous to suggest that there is any correlation between what we are proposing in Ireland and the current UK system,” she said.