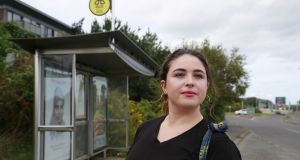 Laura Newsome, a long-distance commuting student: she is frequently late for lectures due to traffic delays. Photograph: Nick Bradshaw

When Adrasteia Hughes accepted her offer of a place studying sociology and linguistics at UCD, she had no idea of just how draining the daily commute would be.

She spends up to four hours each day on buses and trains in rush-hour traffic to get from her home in Co Kildare to the campus at Belfield and back again.

“I get less sleep because I have to wake up at 5.30am to get a 7am train, which obviously impacts my state of mind when I’m in classes.”

While driving would be faster, she is reliant on “horribly inefficient” public transport.

Hughes gets the Newbridge-Dublin train, before catching a bus which crawls through the city, and then out towards the UCD campus. This usually takes two hours.

Delayed or cancelled transport means she has missed graded activities, which directly impacts her overall marks at university.

Initially, she hoped to be able to do college work on her journey. She quickly realised this wasn’t an option.

“The odds of getting a seat on a popular train journey are slim,” she says. “And God help you if you want to try and pull out a big laptop and start trying to do some work when you’re packed like a working-class sardine on a busy Dublin bus.”

And while she hoped to be able to take part in student societies and hang out with friends on campus, these opportunities are few and far between.

“It’s nigh impossible to socialise after hours because I’m relying on trains and buses to get home. If I miss the last one at 11pm, I’m unable to get home,” she says.

Hughes isn’t the only student who is losing out on sleep.

In recent years, Ireland has seen a rise in students commuting long distances for third level.

The proportion of third-level students travelling more than two hours a day is increasing, with 17 per cent now doing so, according to the latest census.

Many students say they are being forced into long commutes due to the rising cost and scarcity of student accommodation.

In Dublin, the average cost of a room in a flat share is €541 per month, though students’ unions say these are in short supply.

While more purpose-built student accommodation is coming onstream, it is becoming increasingly unaffordable for most students.

Many of these expensive units are aimed at the more lucrative international student market and resemble boutique hotels with bowling alleys, cinema rooms and deluxe fittings.

The rising proportion of commuting students also seems to be impacting on campus life.

Some universities have reported falling levels of engagement with student societies in recent years.

In universities such as UCD, for example, the students’ union says events which take place in the evenings, such as debates or large-scale functions, are not getting the numbers they used to.

Instead, much society activity has switched to smaller-scale, mid-morning events, such as coffee mornings.

There are also signs that pressure on students trying to juggle commuting, college work or part-time jobs may be impacting on their health.

Record numbers of third-level students are now receiving counselling for mental health problems, up to 12,000 from 6,000 in 2010.

Some counsellors say they believe the rise is partially linked to increased academic and financial pressures on today’s students.

While many students say they are commuting to save money, transport comes at a cost.

For commuting students like Emma Lynch, who travels from Meath to UCD every day, her coach costs €240 per month.

Add four weeks of Leap Card fare to that and it totals €320, meaning her entire Student Universal Support Ireland (Susi) grant for the month is spent on transport alone.

USI president Lorna Fitzpatrick said these costs are becoming a much bigger factor for students nowadays in choosing where to go to college.

“The availability and affordability of student accommodation is a countrywide issue. For many students filling out their CAO forms, accommodation is higher on their list of priorities than their course preferences when considering university.’’

Aisling Fagan, welfare officer in DCU, said she regularly comes into contact with students who commute from places such as Louth, Meath, Kildare and Wexford.

“For many, commuting is the only option due to the soaring costs of accommodation,” she said. “But commuting long distances can also take a toll on students’ wellbeing and academic success.”

Fagan also points out that missing out on social activities and making new friends can exacerbate loneliness and isolation.

It’s a sentiment that is all-too familiar to student Emma Lynch.

She says she has never been to a late-night event in college because she is a long-distance commuter. “Most college events are in the late evening which is really annoying,” she says.

If she wanted to attend a social event in the evening, she says she has to arrange accommodation in advance in Dublin.

Gertie Rafferty, chair of the Psychological Counsellors in Higher Education in Ireland, sees this in her professional role.

Exhaustion and loneliness can impact both attendance levels and academic performance among commuting students.

“They are not getting proper sleep or exercise, which are essential for their mental wellbeing,” she says.

Emma Murphy, an environmental science student at University College Cork, says she recognises these symptoms in herself. Her commute from Mallow takes up to two hours each way.

“I would say I’m more tired than the average college student,” she says.

“I find I can do less study than others because of the fact I spend four hours per day trying to get to and from places,” she said.

“And if classes get cancelled or changed last-minute, I am essentially – excuse my language here – f***ed!”

Laura Newsome, a UCD student from Delgany, Co Wicklow, says she is frequently late for 9am lectures due to commuting delays, but has no other option.

“The rent prices in Dublin are just too expensive,” Newsome said. “A few of my friends who have long commutes have dropped out of their courses.

“It affected my decision about whether I could even attend university. UCD is the closest university to me.”

Despite all these obstacles, Adrasteia Hughes feels she is, in some respects, one of the lucky ones.

“What of those in rural areas, whose public transport systems are so nonexistent they make Dublin’s inefficient and unreliable fleet seem ideal by comparison?”