Memorial service to be held for Everest climber Shay Lawless 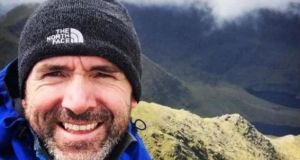 A memorial service is to be held on Monday for a father-of-one who died just hours after summiting the world’s highest mountain.

The search for missing father of one and Trinity College Professor Séamus Lawless who had been missing since falling on Mount Everest nine days ago was called off on Friday.

The 39-year-old from Bray, Co Wicklow fell up to 500 metres during his descent from the mountain at an altitude of 8,300m, in an area known as the balcony. It was his ambition to climb Everest, which stands at 8,848m before he turned 40 in July.

In a death notice on the bereavement website rip.ie, details of the service were given.

“A memorial service celebrating Shay’s life will be held in the Holy Redeemer Church in Bray on Monday at 11am.”

The family have asked for donations if desired to be given in memory of Mr Lawless to Barretstown Children’s Charity.

On Friday, in a statement Mr Lawless’ family confirmed the search has been called off.

“We, the Lawless family would like to extend our gratitude for the huge outpouring of support we have received since Shay went missing on Mount Everest last week and to all who donated towards the search operation.

“In just six days, over €267,000 was donated by more than 7,300 people. Your generosity has been overwhelming and your messages of support mean so much to us. The GoFundMe campaign was instrumental in helping us fund an experienced search team for Shay. Unfortunately it was not successful.

“While the experienced search team has made every effort to locate Shay, the extremes of operating at high altitude and the sheer range of the search area ultimately proved too difficult and based on expert advice we have decided to call off the search rather than risk endangering anyone’s life in the treacherous conditions.”

The expedition team, led by Co Down man Noel Hanna along with eight highly skilled Sherpas, had flown to Camp II and commenced their search from Camp IV which is not far from where Shay went missing.

The team also used drone technology to assist them in the search operation. Mr Hanna was leading the group of eight from Seven Summits Treks when Mr Lawless went missing. He is survived by his expectant wife Pamela, four-year-old daughter Emma, his parents, siblings and extended family.

The family added: “This search operation will be paid for out of this fund and the final cost is still not clear. When it is, it is our wish that any amount above the cost of the search will be accordingly refunded to donors and we will work with the GoFundMe team on that.

“Although the search mission was unsuccessful we will never forget the kindness and generosity of people in Ireland and around the world who were moved by this tragedy and who came together to try and help us. In particular we’d like to extend our appreciation to the search team led by Noel Hanna, the Sherpas, and to the Ireland on Everest team, Shay’s climbing partners, for doing everything in their power to find Shay for us.”

The family went on to thank the government and all of those who knew Mr Lawless in a professional and private capacity. “The backing we have received from the Irish Government, Barretstown Children’s Charity, Trinity College Dublin and the ADAPT Centre has been tremendous and is a small indication of Shay’s legacy.”

Search efforts had been hampered by poor weather, of high winds and frigid temperatures.

Mr Lawless was an assistant professor in artificial intelligence at Trinity College’s School of Computer Science and Statistics. His colleagues there said:

“The tragic death of our friend and colleague, Séamus (Shay) Lawless, has come as a huge shock to all of us. On behalf of everyone at Trinity College Dublin and ADAPT, I want to offer our condolences to his wife, Pam, and their daughter, Emma, and to his large family, all his friends, students and colleagues.

“At ADAPT we are mourning the loss of one our rising research stars, an inspirational colleague, and a much loved and valued member of our family. Shay’s legacy is enormous. An expert in Information Retrieval, his peer-reviewed publications, his supervision of cutting-edge doctoral research, and his leadership of internationally acclaimed research projects have transformed the boundaries of the discipline.

“As a colleague and as a friend, Shay’s enthusiasm, his creativity and his approach to his work was inspirational. In the months ahead we will gather to pay tribute to his remarkable scholarship and his contribution to ADAPT and Trinity College Dublin and it will be an opportunity for friends and colleagues to remember someone who will never be forgotten.

“We are heartbroken at this news and will be making no further statement at this time. Ar dheis Dé go raibh a anam dílis.”