The Green Party's Saoirse McHugh hits out at Independent candidate Peter Casey during a Prime Time European Election debate, telling the former presidential election candidate to "go on Dancing with the Stars if you want the attention." Video: RTÉ 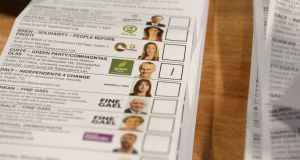 Votes are sorted as election boxes are open in the RDS Dublin. Photograph: Dara Mac Dónaill

If anybody needed proof of the fickle nature of politics, this election has proved it.

Only eight years ago, the Green Party were almost eviscerated in Ireland. They lost all six Dáil seats, and their three Senate seats. They had only three councillors, having had 16. The party won less than 2 per cent of the national vote and lost all its State money.

For the following years, they could hardly muster 200 people to their annual conventions.

And so, if the RTÉ exit poll and the early tallies are to believed, the Greens have had a breakthrough election.

It is more than a surge.

It is a torrent.

Ciarán Cuffe looks like he will top the poll in Dublin with well over a quota. And there are strong indications that the party will return MEPs in all three constituencies.

The conditions for this “perfect storm” have been brewing for quite some time. Climate change, over the past two years, has moved firmly from the periphery into the centre of politics and would now be seen as a core issue.

Other parties have recognised this and have been very busy triangulating to present themselves as ‘green parties’. But the Greens are, axiomatically, the original of the species.

The second is that the patterns of the the last two referendums have not been dispensed with in conventional politics. A lot of support for the Greens has been generated by younger people. It’s not only those of voting age, but also teenagers and younger children.

One of the most telling moments of the last press conference held by the Greens was when Roderic O’Gorman talked of a phenomenon he had never witnessed before. He said he had met parents and grandparents at doorsteps who said they were voting Green because their children and grand-children were pressurising them to do so. It is an another example of an electoral situation when the older generation took its lead and advice from a younger generation. Again kitchen table discussions played their part.

Events in the lead-up to the elections also worked in favour of the vote. The energy and emotion of the youth and children climate marches gave a strong focus to the issue and the urgency associated with it. The Dáil declaring a climate emergency during the campaign was also a stand-out moment.

The two campaigns, local and European, were rather insipid and only began to gain momentum in the closing days. It was then that Saoirse McHugh made two critical interventions in the Prime Time debate taking on Peter Casey, who is perceived to have strong views on immigration. They became the take-away moments from that debate, and by extension, from the entire campaign.

McHugh would have been unknown to many electors in Midland North West until that moment. But in the space of 90 minutes she catapulted into national consciousness and became emblematic of the Greens’ campaign. It was one of those moments when a TV debate influenced the outcome of an election, like Seán Gallagher’s implosion during the 2011 presidential campaign.

Suddenly, McHugh had come from nowhere and was now a real contender for the seat. And her performance had a ripple effect for the party, helping other colleagues. The question for the Green Party, a little like Labour in 1992, became, did it run enough candidates.

At this stage we must enter a note of caution. The exit polls may be a little off (as it is covering two elections and the percentages change between one and the other). Secondly, there is no doubt that this election will put the Greens well placed to make gains in the next Dáil.

In the past, voters have tended to view the Greens as a party best suited for Europe and local authorities. Its Dáil seats have never reflected its success in second-tier elections. That might change the next time, and the party could find itself pushing into double digits in the 33rd Dáil.

Regardless, today will probably be the party’s best day in its 40-year history.