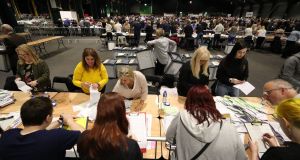 Meath County Council will only formally commence its local election count on Sunday for logistical reasons, not because of Meath’s Leinster senior championship quarter-final clash against Carlow.

Early speculation that it had been delayed in the GAA stronghold because of the match has been dismissed by county council chairman Independent Tom Kelly.

Meath play Carlow in Portlaoise at 5pm on Saturday.

Cllr Kelly said counting officials would be working all day to segregate and sort ballot papers for the divorce referendum, the European and local elections.

Labour candidate for the Bettystown-Laytown electoral area Annie Hoey expressed regret that candidates would have to wait an extra day for the count.

“It’s frustrating when other candidates in other council areas will start counting tomorrow,” she said on Friday.

Ms Hoey added that candidates knew formal voting had been delayed because the three lots of ballot papers would have to be separated and sorted, a time consuming exercise, and then moved from one venue to another.

But she said it the decision to wait meant “people were saying ‘it’s because of the match’ and the rumour has grown legs”.

Mr Foley said opening of all ballot boxes, including local election papers, would start at Trim GAA centre at 9am and continue throughout the day until all boxes are open and reconciled.

Counting in the divorce referendum will go ahead on Saturday at Trim as will the European election count on Sunday.

Local election ballot papers will then be moved to Simonstown GAA in Navan for counting.

Mr Foley said “we are uncertain at this stage what time opening of boxes and reconciliation will be completed in Trim and timing of this may vary”.

There are 273 boxes from polling stations as well as “postal and special boxes to be added”.

He said: “As we are moving location thereafter it may run too late to commence and complete first count proper on Saturday night. Hence the decision to start afresh Sunday morning at 9am.”