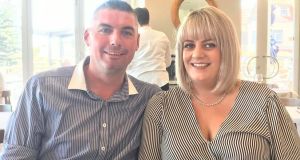 Annette O’Donnell and her partner Michael Hillary: “It’s a bit eerie and sad opening this morning and having to take away tables and chairs.”

Annette O’Donnell has been through a Covid-19 lockdown once. Now, the Ballylanders, Co Limerick, woman is having to do it all over again at the Galtee Cafe in the Richmond district in Melbourne, Australia.

“It’s a bit eerie and sad opening this morning and having to take away tables and chairs knowing we won’t have anyone dine in for six weeks,” said O’Donnell, who is now back to serving takeaways.

However, she holds out hope that the second lockdown in Melbourne and surrounding districts, one that affects five million people, will be “less daunting than the first time as we now know what to expect”.

On Tuesday, the state of Victoria reported 191 new cases – its highest-ever daily total, bringing numbers so far to over 3,000. For the next six weeks, residents can leave their homes for work, study, limited exercise, shopping, medical care or to care for others.

“I think it’s dawning on people how serious the outbreak is again so everyone is staying home . . . hopefully trade will pick up once we settle back into lockdown routines again,” O’Donnell told The Irish Times.

The number of community transmission cases has risen steadily since mid-June, with no known family links, which led Victoria’s premier Daniel Andrews to warn that Melbourne could be “on the cusp of something very, very bad if we don’t take these steps”.

Many of Melbourne’s Irish community are fearful about a second lockdown: “I have to say it’s more daunting the second time around, knowing what it will be like,” said Róisín Sullivan, from Portumna in Galway

“The first time around it was a new thing, almost a novelty, but there was a sense that if we got through it and did the right thing, we’d come through and life would go back to normal. Unfortunately that doesn’t seem to be the case.”

However, there is a community spirit, too. “As Melbournians, we’re all in this together and determined just to crack on with the lockdown,” said Sullivan, who has lived in Australia for five years, half of that time in Melbourne.

Currently, schools across Melbourne are closed for winter holidays, but the break will be extended for a week, while the Victorian government weighs up the possibility of bringing back remote learning.

Deirdre O’Doherty, a secondary school teacher from Sligo who has lived in Melbourne for six years, will be one of those involved in whatever plan is chosen: “This time around, unfortunately, there is no mystery about the whole process.

“That initial anticipation that got us through the early days of the first lockdown – being glued to the news, listening to every update from the premier and hanging on every word in the newspapers – has dissipated,” she said.

“We don’t complain about it because we understand that it is necessary, but we are definitely not looking forward to the weeks ahead.”

O’Doherty has mixed feelings about the possibility of going back to remote learning: “If we go [back to it] with the juniors, we can be clearer about how long this will go for, to give them the opportunity to adjust.”

For other Irish, however, the second lockdown could mean the end of their Melbourne dream.

Niamh Devanny from Co Clare came to Australia in December, with plans to work and travel around Australia.

However, she lost her job in the first lockdown, and could not find another for three months. Just three days after she did, the second lockdown was imposed. She was let go. “It kind of feels like it’s never going to go away,” she said.

Now, Niamh and her partner are planning to leave Melbourne for regional Victoria to get farm work that will qualify them for a second year working holiday visa. “We haven’t seen anything in Australia . . . We just want a second chance to come back and do what we had planned to do.”

The second lockdown will force change, too, for Bianca Gannon, a Galway-born musician and piano teacher. She had been contemplating a move to Queensland, but held back until her album launch occurred in August.

Now, gatherings are banned, venues shut and music classes are back online: “If we’re not getting work in music and the arts, there’s not that much to stay for.” She spent the last day before lockdown “saying goodbyes, at a distance, to close friends and family”.