Mayo v Dublin: ‘It’s bringing two cultures into one place on my head’ 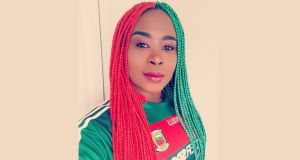 Kany Kazadi’s screaming red and green hair braids have jumped off her Twitter page and rustled up a stor. Photograph: Kany Kazadi/Twitter

Kany Kazadi’s screaming red and green hair braids have jumped off her Twitter page and rustled up a storm. Mayo can only hope they have the same capacity to steal the limelight on Sunday.

Kany is determined to be there to see them. Her social media appeals to secure a golden ticket have been helped no end by her county-coloured hair.

“I have paid for all my tickets no matter what the price,” she says proudly. This is not a fair weather fan whose interest begins at the end, or as Kany puts it: “I just didn’t come out of the blue with my hair hoping to be there. I have been on this journey since 2015; I have proof!”

Kany’s story is much more than just another fan looking for a ticket. In fact, it is the story of the GAA itself; the search for community and a common purpose that briefly rises above all other things.

As a young asylum seeker, she arrived in Ireland and spent four years in a Ballyhaunis direct provision centre, having left the Democratic Republic of Congo (DRC) in 2005.

The hair is done but no ticket😔still hoping 4 a miracle at this stage.If there is a spare anywhere please Im here #mayo4sam #Inthistogether pic.twitter.com/VZpmwlSncP

“They should be abolished,” she says of the centres, and of the system against which she has campaigned. Later she settled in Castlebar and sought to embrace life there, she says. She found the GAA.

Recalling the first game she watched, on TV in a hotel with another former asylum seeker friend, she was captivated by the passion in the room. Mayo lost but she discovered something.

“I was like ‘wow!’ this is sensational. Then I did my research and I found out that the players didn’t even get paid,” she says looking back. “To have that commitment to train year after year and not get paid.

“It’s just about the game. Not about where you come from or how you speak. It’s about passion and the love of the game. And of course the Mayo colours.”

Following her 12 hour ordeal to have these very colours carefully woven through her hair, Kany’s braids are attracting attention. Cars are beeping, people are having pictures taken and pedestrians are double-taking.

“If I knew that hair could create a frenzy like that,” she muses. It is a traditional African style, if not colour choice. “It’s bringing two cultures into one place on my head,” she laughs.

Kany’s devotion to the Mayo team caught the eye of telecommunications company eir, sponsors of the All Ireland Senior Football Championship, who have offered her and a friend tickets to the match in Croke Park this Sunday.