Budget 2018: Helping middle-income families to be a priority 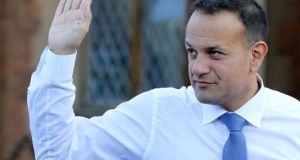 Leo Varadkar is to confirm the theme of his tenure will be ‘a republic of opportunity’.

Reducing the burden on middle-income families will be a key Government priority in the upcoming budget, Taoiseach Leo Varadkar is to stress on Thursday.

Mr Varadkar is to outline his Budget 2018 priorities at a Fine Gael parliamentary party pre-Dáil gathering in Tipperary.

It is understood Mr Varadkar is particularly focused on those who earn the minimum wage. Workers who claim overtime are hit with significant levels of tax, and the Taoiseach is examining ways to reduce that burden.

While insisting the Government needs to be prudent, Mr Varadkar will insist on the need to cut taxes for those on modest incomes.

The Taoiseach is expected to say: “As Minister [for Finance] Paschal Donohoe has made clear we will do what is necessary to keep Ireland secure in a risky world. So we will keep public spending increases modest and sustainable.

“However, where we have scope in the budget it will be used to reward work and enterprise, and will benefit those on middle incomes who pay the highest rates of tax on far too modest incomes...there should be no cap on aspiration in the Republic we wish to build.”

The Government believes the rates will not have to be reduced but the income bands can be widened to reduce the point at which taxpayers become liable for higher rates.

Currently a single taxpayer becomes liable for the higher rate after earning €33,800, a low level by international standards. The rate for married couples where just one is earning is €42,800. Increasing the band would benefit those earning above these income levels by ensuring that more of their pay would be taxed at the lower 20 per cent rate.

Mr Varadkar will stress this point during his first significant speech as party leader on Thursday.

Meanwhile, the Independent Alliance held a meeting on Wednesday to discuss its budget priorities.

It is understood Ministers sought an increase in the allocation for their departments, while a tax credit or a payment for stay-at-home parents was also discussed.

The Alliance also sought a series of measures in the housing sector including the re-establishment of a new National Building Agency and increasing rent allowance for families.

The group is expected to meet again next week to finalise its priorities ahead of a meeting with Mr Donohoe next week.

Meanwhile, the Taoiseach will on Thursday confirm the theme of his tenure will be a Republic of opportunity, and will brief Fine Gael members on how he intends to achieve that ambition.

“Two – that every part of the country has the opportunity to share in our recovery and prosperity.

“And three – that there are second chances for all those who need them.”