Government urged not to bring back the bedsit

Removing ban on single-room occupancy would be ‘regressive and wrong’ 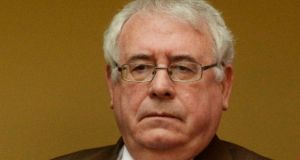 The Government is being urged by Opposition parties not to revoke a ban on bedsits amid signals that Minister for Housing Eoghan Murphy will announce the move next week.

Mr Murphy is set to bring back single-room occupancy as a means of easing the housing crisis as part of a package of measures that will include include stronger protection for tenants.

However, the Labour Party’s spokesman on urban regeneration, Joe Costello, said removing the ban would be regressive and wrong.

“The bedsit is not a healthy option for accommodation and thousands of people were condemned to cramped, unsanitary conditions before their abolition in 2013,” he said.

Speaking in Athlone, Mr Murphy said he would be bringing a number of new proposals to Cabinet.

Asked by reporters about the bedsits plan, the Minister replied: “I think we have to look at all possible solutions. I have been looking at that over the summer and I will be coming with an announcement on that shortly.”

Mr Murphy added the Government was looking at changing some regulations to make house-building more attractive for developers.

Asked did this mean previous housing policy was a failure, he said: “I think in the past the government of the day outsourced its responsibility for social housing to the private sector.

Criticising the signalled move on bedsits, Mr Costello said their reintroduction would not resolve the housing crisis, or even help resolve it.

“Landlords who created an average of nine units of bedsit accommodation in the old Victorian houses along the North Circular Road and who have had to restructure that accommodation into one-bedroom units by 2013, would quickly tear the dividing walls down and revert to type.”

Green Party leader Eamon Ryan said bringing back bedsits could mean taking accommodation back to the way it was “before the sixties”.

Alone, the charity that supports older people in their homes, said it was concerned by the report about a change to the law.

Along with many other organisations, Alone had spent years campaigning for the abolition of bedsits, it said in a statement.

“People may not be aware that bedsits mean shared bathrooms and we believe that all individuals deserve a home that is of a high standard, with private sanitary facilities, proper heating appliances, and proper food preparation areas.”

However, the chairman of the Irish Property Owners Association, Stephen Faughnan, said it welcomed, with cautious optimism, the proposal to lift the ban.

“The banning of good-quality, affordable accommodation because there was no integrated bathroom was a huge mistake.”

Many people who had been forced out of comfortable, affordable, centrally-located accommodation were now homeless, he said.

Mr Faughnan said the homelessness crisis was caused by governments not providing social housing and forcing people into the private rental sector, and was made worse by constant interference and legislative changes which eroded investor confidence.

“Investors need confidence and stability and more investors are leaving the sector than entering,” he said. “I hope that good sense will prevail with the current Minister.”