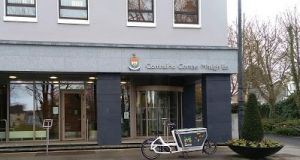 Two county councillors in Mayo have been found to have breached the code of conduct for councillors by the Standards in Public Office Commission (Sipo) over their actions in an attempt to rezone land for a nursing home.

Reports published by Sipo on Thursday found against councillor Frank Durcan, an Independent, and Cyril Burke of Fine Gael.

The pair were investigated by the State’s ethics watchdog over the potential rezoning of land owned by Mr Durcan outside Castlebar for the construction of a nursing home.

In addition, Sipo investigated a number of Freedom of Information (FoI) Act requests submitted by Mr Durcan to Mayo County Council; he was unhappy about a planning decision made by the council.

Lands owned by Mr Durcan at Aghalusky, Co Mayo were at the centre of the inquiry, which were zoned as rural in character in a development plan adopted by Mayo County Council in May 2008.

However, in October 2010 a pre-planning inquiry was submitted to the council for a nursing home and 20 residential units on the 6.5 acre site. In December 2010, the council said the proposed development was premature “having regard to the zoning objectives for the area, the lack of public services and traffic safety concerns”.

Mr Durcan submitted FoI requests to the council four years later, in August 2014, regarding “the appointment of a senior official”. The requests were withdrawn in early September 2014, before being resubmitted in late October.

At the heart of the Sipo investigation was contact between Mr Durcan and Mr Burke around this time, including accounts of meetings held between the pair, recordings of phone calls and the examination of text-message exchanges.

The calls showed Mr Durcan seeking assurances from Mr Burke that his land would be rezoned, although he later claimed this was part of an effort to expose corruption. Sipo rejected this claim.

Sipo found that both men entered into an agreement whereby Mr Durcan would withdraw the FoI requests. It said Mr Durcan did this in the expectation he “would obtain favourable planning treatment for his lands at Aghalulsky”.

It also said that Mr Burke asked Mr Durcan “to withdraw an FoI request he had made and he is heard on recordings with Cllr Durcan planning ways of getting planning permission for lands zoned as ‘rural character’ in a less than transparent manner and without any apparent concern for the public interest or the position of trust he occupies”.

“The commission is satisfied that Cllr Burke entered into an agreement with Cllr Durcan to the effect that Cllr Durcan would withdraw his FoI requests and Cllr Burke would help him get planning permission.”

Sipo found that both men did not act in “good faith” when they “recklessly engaged in conduct, over a sustained period of time, in contravention of various provisions of the Code of Conduct for Councillors”. Both men were also found to have contravened the provisions of the Local Government Act.

Sipo also found Mr Durcan’s evidence to its hearings to be “unreliable” and cited a number of instances where it was refuted.

Allegations were also made that Peter Hynes, the chief executive of Mayo County Council, arranged for Mr Burke to ask Mr Durcan to withdraw an FoI request in exchange for favourable zoning of land. Sipo found, however, no direct evidence to support the allegations. Mayo County Council has said Mr Hynes has been “totally vindicated”.