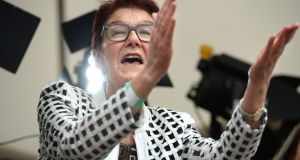 Ailbhe Smyth at the central count centre in Dublin Castle for the abortion referendum in May. Photograph: Dara Mac Dónaill

Ailbhe Smyth heard around 4pm that there was a possibility that legislation clearing the way for abortion in Ireland could pass earlier than the expected 10pm finishing time.

She hopped on a Luas and headed to the city centre to make her way to Leinster House. Following years of effort, this was not a moment to miss. She was not alone.

While Senators spent more than 10 hours yesterday discussing the final stages of the new law, long-term campaigners for repeal of the Eighth Amendment quietly flitted in and out of the public gallery.

However, the celebrations around the Seanad as the Bill passed were low-key, but campaigners such as Ms Smyth, who was the co-director of the Together for Yes group, hailed the historic day.

“It has taken us a very, very long time, all of my adult life, to get to this point. Having repealed the Eighth Amendment and having removed it from the Constitution, it is very satisfying to see a law being put in place that will respond to many of the needs that women in Ireland have.

“It is satisfying to see basic legislative structures being put in place. I always thought there would be a very robust debate, and indeed there has been. I actually feel that is part of the democratic process.”

Campaigners have it made it clear, however, that they are not resting on their laurels as they keep one eye on the future.

“We had hoped for a number of amendments that did not get through. But an important marker has been put down. There are issues that the Dáil and Seanad will likely be coming back to, maybe even sooner than we would think.”

This includes the area of decriminalisation. During the lengthy debate in the Dáil, pro-choice campaigners made the case for the full decriminalisation of abortion. Their attempts were unsuccessful, however.

“It is important for women and it important for doctors.” The three-day waiting period, which is the period of time which must elapse before a woman can get access to medication for a termination, will be another focal point in the coming months.

“Many of those who put amendments to this Bill stressed that the three-day waiting period is unnecessary and there is no rationale for it. I imagine it is something that will be looked at again,” she said.

Orla O’Connor, director of the National Women’s Council, pointed towards other legislation that would be necessary now that the Bill had passed.

“We will campaign in the new year for safety zones to protect women for abortions,” she said, referring to so-called buffer zones that would ban protests near where women accessed abortion services.

But she, too, said the passing of the legislation represented a “really historic day.”

“There has been decades of campaigning on this by women’s organisations. I think it is really important to remember the thousands of women who have had to travel, and also the women who have had to travel since the referendum itself. Now we are seeing the result of the referendum coming into effect, and it is very welcome. It is an enormously significant change for women.”

Labour Senator Ivana Bacik has campaigned on abortion rights for the past 30 years.

She and her student union colleagues were threatened with jail in 1989 for giving out information on abortion.

She spent the day yesterday in the Seanad chamber discussing almost 50 amendments in a debate that often became angry and divisive. After the debate concluded, she spoke about the relief she felt for the next generation of Irish women.

“I have an immense feeling of relief that my daughters won’t have to grow up under the chill of the Eighth Amendment the way my generation did, and that Irish women in crisis pregnancy will have access to free and safe legal abortion services here in Ireland from January.”

As the Bill made its way to Áras an Uachtaráin last night, Minister for Health Simon Harris echoed her comments: “The law, at last, is changing. We will have a service. It will be legal. It will be safe. It will be free.”