Pearse and Tara Street Dart stations closed for the weekend 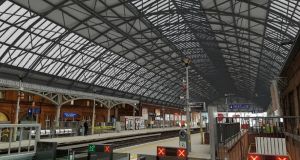 An impression of what the roof of Pearse Street will look like after the works. Photograph: Irish Rail

Rail passengers are facing disruption in Dublin this weekend with stations at Pearse Street and Tara Street closed to facilitate repairs.

Iarnród Éireann has closed both city centre train stations on Saturday and Sunday to allow work continue on the Victorian roof of Dublin Pearse station.

The roof dates from the 1880s and is in poor condition, which has led to the installation of protective netting below roof level in recent years.

A number of dates have been scheduled to facilitate the 23-month repair project, which will cost €17 million and is funded by the National Transport Authority.

Dart services will operate between Howth/Malahide and Connolly on the northern section of the line, and between Grand Canal and Greystones on the south side. Trains between Dublin Connolly and Rosslare Europort will have bus transfers between Connolly and Bray.

Separately, the following service alterations are also in place this weekend for Irish Rail passengers:

- Dublin/Belfast Enterprise: Due to Translink engineering works there will be bus transfers between Newry and Belfast for all Enterprise services on Saturday and Sunday. Bus transfers from Belfast will depart 10 minutes earlier than standard train departure times;

This the third weekend closure of 13 scheduled for the works which commenced in November and will continue until July 2020. The replacement of the roof has been identified by Iarnród Éireann as a crucial safety project.

“Most of the work is taking place at night-time, but we need to do daytime work occasionally,” said Irish Rail spokesman Barry Kenny.

Mr Kenny said that weekends are the quietest times at the two city centre stations.