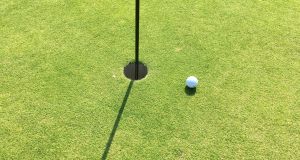 DLR County Council said it wants to bring grass greens back to the Marlay Park course.

Dún Laoghaire-Rathdown County Council is planning to redevelop its par-three golf course in Marlay Park, which it had closed in recent years following an unsuccessful move to artificial putting greens.

The public golf course in Rathfarnham has been closed since early 2018, after numbers using it dwindled following the installation of synthetic greens during a previous redesign in 2011.

Ruairí Ó Dúlaing, the council’s head of parks, said the switch to artificial greens had been a “disaster” for the course. “We had got some advice that artificial greens were the way forward for public golf courses. That was very poor advice.”

The artificial greens had made the course incredibly difficult to play, particularly for less experienced golfers more likely to use the public facility, he said.

“It was way too difficult for your casual golfers… If you pop the ball on to the green it just rolls away, which is demoralising,” he told The Irish Times.

Following years of declining footfall, the council closed the course three years ago. Now the local authority is seeking to install new grass greens and reopen the course.

In recent weeks, the council has engaged an external golfing consultant to advise on the revamp of the course, who will report back within the next two months.

Following further discussion with councillors, the local authority then plans to go to tender seeking a company to undertake the project. The cost of the redevelopment will depend on the scale of the works required.

“Grass greens would be what we would go back to,” Mr Ó Dúlaing said. It was his “ambition” to advertise the tender for the project by the summer.

The council received some criticism after the course was initially closed in 2018, but people had “voted with their feet in terms of not wanting to use it,” Mr Ó Dúlaing said.

The redeveloped course would need to “wash its own face” financially, and be able to cover the cost of its upkeep, he added.

When it came to council projects if “something goes badly it’s out there for everyone to see”, so officials were keen to avoid a double bogey with the second redevelopment of the course, he said.

It was crucial the facility “doesn’t end up closed again after we spend X amount of public money”.

One option being explored would be for a private company to take on the “upfront costs” of the redevelopment, then operate the facility under licence for a number of years, he said.

The revamped course would look to attract players who were not members of private golf clubs, and children from schools in the area. “You’re not going to be told you can’t play because of what trousers you’re wearing,” Mr Ó Dúlaing said.

“Golf suffers from its image sometimes … a lot of kids would never be exposed to golf,” he added. The council would also look at having some type of coaching facility at the course to help introduce people to golf.