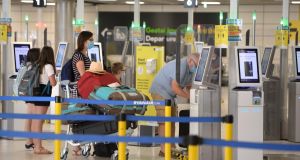 The Government is likely to avoid the harshest measures to curtail international travel or the movement of people arriving from overseas when it updates regulations on travel next week.

While final decisions have not been made, the focus is likely to be on strengthening existing rules, as well as improving the accuracy of data gathering on where people are staying, and checking more closely on those restricting their movements on arrival.

Government sources believe the introduction of mandatory periods of quarantine, or the cancellation of flights from some parts of the world, is unlikely to be the outcome of discussions on travel which will take place this week.

Speaking after a Cabinet meeting on Monday, Minister for Foreign Affairs Simon Coveney said: “I don’t think we should prevent flights from landing in Ireland or ban international travel. That isn’t the approach we’ve taken.

“It’s a very difficult thing to have primary legislation to underpin a requirement to restrict your movement or to self-quarantine, and the practical enforcement would be very difficult,” he said.

Mr Coveney said while international travel remained the “most significant risk in Ireland now to the re-emergence of this virus”, other considerations had to come into the equation.

“We need to put this in perspective. Of course we need to make sure we take a public health approach first but also a pragmatic approach after that to try to ensure we maintain connectivity as an island.”

He said 200-250 people were arriving into the State a day from the United States, out of a total of about 4,500. One flight from Dallas, which attracted much criticism, had only 16 people on it, he said.

A senior Government source said mandatory quarantine was “not a proportionate response”, and the focus was on “trying to persuade people to do the right thing”.

Aer Lingus said its transatlantic passenger numbers were low and largely involved repatriation of citizens. It said there was an average of about 150 inbound passengers a day arriving from North America, compared with 4,200 a day for the same period in 2019. About 30 per cent travel onwards elsewhere in Europe.

Overall, passenger numbers from the US to Ireland have been less than 10 per cent of normal levels.

Figures from the Department of Justice show that since the end of May, three people refused to complete the passenger locator form, and were referred to the Garda National Immigration Bureau.

Mr Coveney said on Monday that those found to have knowingly filled in the passenger locator form with inaccurate data could face a fine, or imprisonment, or both. “If you’re lying to us, you’re breaking the law.”

There were 11 additional coronavirus cases reported by the National Public Health Emergency Team (NPHET) on Monday, and no deaths for the second day in a row.

Dr Ronan Glynn, acting chief medical officer, warned against people assuming that a foreign accent “is necessarily associated with a tourist from any particular country”. He also cautioned against assuming NPHET would recommend moving to the final phase of the country’s reopening on July 20th, under which all pubs can resume trading. “I think we are concerned about the increase in cases over the last five days,” he said.

Separately, new parents will get three additional weeks of leave under proposals brought to Cabinet on Monday. Minister for Children Roderic O’Gorman said the additional weeks would apply to the parents of all children born since November 1st, 2019.

And in a move to bolster business, the Government has said next week it will publish the Credit Guarantee (Amendment) Bill 2020, which will underpin its €2 billion Covid-19 Credit Guarantee Scheme.

Newly-appointed Junior Ministers will not get special advisers 20:33
Parents encouraged to ditch the car for ‘cycle bus’ 20:32
Students to wear face coverings in lectures where two metre distance not possible 20:28
Gardaí find potential breaches of Covid-19 rules in 24 pubs 20:15
Man charged with murder of woman (20) in Newry 20:04