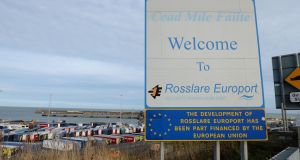 Gardaí are investigating after a number of men were seen getting out of a truck in Co Wicklow which had arrived into Rosslare port on Monday morning.

A Garda statement said it was investigating “possible immigration offences” after a group of about six to seven men were seen alighting from a truck which was making a delivery to a business park in Newtownmountkennedy in Co Wicklow at around 10.50am. The truck had arrived into Rosslare port earlier but drove on to the Newtown Business and Enterprise Centre to deliver goods.

Bridget Murphy, who was walking by the business park shortly before 11am told RTÉ’s Six One news that she and her daughters got a fright when two men suddenly jumped over the gates of the park.

“Then another four guys jumped over and they ran in the direction towards Newcastle hospital,” she said. “They looked pretty scared and they were changing t-shirts and running along.”

Ms Murphy later informed gardaí she had witnessed six men jumping over the gate after seeing garda cars in the area and a helicopter flying over her estate.

The truck which arrived into Rosslare Port has been detained for technical examination but gardaí would not comment on the whereabouts of the men.

The investigation into the incident is ongoing.