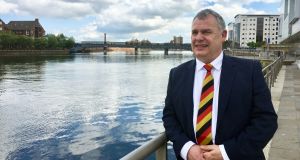 Paul Kirkpatrick, a haemophiliac who was infected with hepatitis from contaminated blood products, in Belfast after giving evidence to the blood inquiry. Photograph: David Young/PA Wire.

A man has told an inquiry into a contaminated blood scandal, which has affected thousands of people, that he fears his children will be mocked as a result of him telling his story.

The contaminated blood inquiry, chaired by former high court judge Sir Brian Langstaff, is exploring a controversy dating back to the 1970s when imported clotting products derived from blood plasma caused haemophiliacs and others to be infected with hepatitis and HIV. It has started hearing evidence in Belfast.

Thousands of people across Britain and Northern Ireland were infected with the contaminated blood and there have been allegations of attempts to cover ups the scandal. Some 2,400 people are believed to have died as a consequence of the contamination.

At the first hearing of the inquiry outside London, Paul Kirkpatrick, a manufacturing manager from Derry, said it had been difficult to tell his story and that he feared his children would be “mocked” for his decision to do so in a public forum.

He said he was born with severe haemophilia, which affects the blood’s ability to clot, and received Factor VIII products in the 1970s when he was 10. His parents were told he was taking a “wonder drug”.

Mr Kirkpatrick said it was “a relief” as an 18-year-old to learn he had not contracted HIV due to blood contamination. But he later found out he had Hepatitis B and C. “I was told, ‘don’t worry about it’,” he said.

He told the inquiry his brother Des, also a haemophiliac from childhood, died suddenly in 2014, aged 51. “My real concern here is he looked good, his blood results looked good but he died in a matter of weeks from cancer,” he said. “It can be related to the Hep C. That is my concern.”

Mr Kirkpatrick said he is worried his liver has been damaged and he too will get cancer. “It’s an unknown,” he said. “It is a fear, it will live with me.”

An anonymous witness, Ms E, told the inquiry she was diagnosed with Von Willebrand disease, a blood clotting disorder, as a child. In 1989, when she was 17, Ms E haemorrhaged after having her tonsils removed and was treated with cryoprecipitate “as a last resort”.

She believed this was the cause of her being infected with Hepatitis C but then discovered in GP notes from 1987 that she already had the disease.

Ms E said her health has deteriorated over the years, she had to give up work, and her marriage broke down. She said she felt like a “guinea pig” and eventually became “a recluse”.

She said there was a stigma linked to having Hepatitis C and that people asked her “is that the same as Aids?” so she began to say she had a liver problem, which led people to wrongly assume she was an alcoholic.

Eventually the hepatitis was cleared and she thought her health would improve but it did not. “It has got worse and worse over the years,” she said.“I am no wiser to what it is down to.”