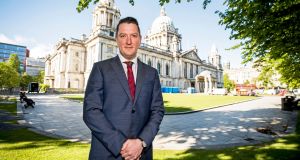 John Finucane said it is a proud day for him being elected Lord Mayor of Belfast. Photograph: Liam McBurney/PA

The son of murdered human rights lawyer Pat Finucane has been elected as the new Lord Mayor of Belfast.

At the council’s AGM at city hall on Tuesday, following the local government elections in the North earlier this month, Sinn Féin Cllr John Finucane was named as mayor.

His deputy will be the Alliance Party Cllr Peter McReynolds.

Cllr Finucane told The Irish Times he would be continuing the work of outgoing mayor Deirdre Hargey by “putting rights at the heart of my year in office”.

“I will also be focusing on economic prosperity, reaching out to the vulnerable and those on the margins, and making the council as green and as clean as possible,” he said.

The 39-year-old father of four, a former Antrim goalkeeper who now plays senior club football for Lámh Dhearg in Hannahstown is a solicitor and long time campaigner for a public inquiry into his father’s death.

In 1989 solicitor Pat Finucane (39) was shot dead by loyalists at his home in north Belfast, in front of his wife Geraldine, who was also injured, and their children Michael, Katherine and John.

A review carried out by lawyer Sir Desmond de Silva QC confirmed agents of the state were involved in the murder and that it should have been prevented.

Former Prime Minister David Cameron acknowledged “shocking levels of collusion” and issued an apology but reneged on a previous administration’s commitment to hold a public inquiry into the killing.

The Finucane family are pursuing an inquiry through the courts.

Cllr Finucane said his mother Geraldine is “happy” for him to be the first citizen of the city.

“She is happy, and she has all the worries you expect a mother to have,” he said.

“She had said to me she remembers my dad coming into the council in the 1980s as a legal observer and being very angry with what he saw and how it didn’t govern for everyone.

“Thirty years later I am mayor and that shows progress.”

On what his father would have made of his appointment Cllr Finucane said he would be proud and joked, “he may even have stretched to a compliment for me”.

“He would have been mindful of the progress and the significance of it,” he said. “It is a proud day.”

He says he will have no problem in being a representative for all the people of Belfast. “I will be shameless in showing off Belfast at every opportunity and I am conscious that I am a mayor for everybody,” he said.

“There are no no-go areas of the city for me.”

The rotation of the role of Belfast’s mayor will see the DUP take the position in 2020, the Alliance Party in 2021 and Sinn Féin again in 2022.