Girl was pictured apparently behind the wheel of vehicle on motorway 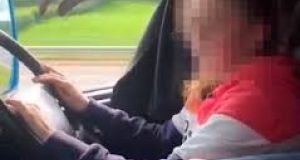 A screengrab from a video which appears to show a young girl driving a lorry on a motorway in Co Tyrone.

A 49-year-old man has been arrested in Northern Ireland in connection with a video shared online which appeared to show a young girl driving a lorry on a motorway in Co Tyrone.

The Police Service of Northern Ireland said he had been arrested on suspicion of a number of offences including aiding and abetting driving whilst disqualified by reason of age and cruelty to children.

He was released on bail pending further enquiries.

Last week, a 37-year-old man was arrested on the same charges in connection with another video which appeared to show a boy at the wheel of a lorry on the M1 near Dungannon.

The North’s First Minister, Arlene Foster, condemned the “crazy videos”, which were filmed in her constituency of Fermanagh and South Tyrone.

“This is reckless for the people in the HGVs and other road users,” she said. “A vehicle like this veering out of control into traffic is unthinkable.”