On their first anniversary of their marriage to avoid inheritance tax, friends Matt Murphy and Michael O'Sullivan discuss what they believe makes a successful marriage. 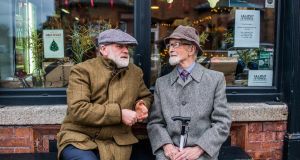 A man who married his long-time friend for tax purposes two years ago, has died aged 84.

The unorthodox union of Matt Murphy and Michael O’Sullivan (60) made headlines after Mr Murphy told RTÉ Radio’s Liveline that he planned to marry his heterosexual friend of 30 years to help him avoid paying inheritance tax on his home.

Mr O’Sullivan moved in with Mr Murphy during the recession after his apartment was repossessed and he acted as his carer in recent years.

The two married in the Dublin registry office on December 22nd, 2017 and lived in Mr Murphy’s home in Stoneybatter.

Mr O’Sullivan, a father of three, was divorced but it was Mr Murphy’s first marriage.

Mr Murphy was admitted to the Mater Hospital in the middle of last week following a fall, in which he hit his head, Mr O’Sullivan said. He died at around 4am on Tuesday with his husband by his side.

“He was comfortable enough, he never woke up in the last two days. He let out a few light breaths and then he passed. I was there when he passed,” Mr O’Sullivan said. “We are going to wake him in the house so people can say cheerio.”

His funeral Mass will be held in Cashel, Co Tipperary, where Mr Murphy was born. He will be cremated and Mr O’Sullivan will then spread his ashes near Cashel, and at a small graveyard where Mr Murphy’s mother and relatives are buried.

Speaking about the response to the story of their marriage, Mr O’Sullivan said Mr Murphy had “loved it”.

He said that when Mr Murphy was born in 1935 his mother was a single woman and, as such, he came into the world “under a cloud” given attitudes at the time.

“But he went out with a bang,” Mr O’Sullivan said.

“From the day Matt contacted Liveline over two years ago to praise the Mater Hospital and then let us in on what he called his ‘secret’ - that he was getting married to his carer - his grace, generosity and good humour captured the nation,” he said.