Moss Finn: ‘There is an incredible amount of loyalty to local businesses in Cork’ 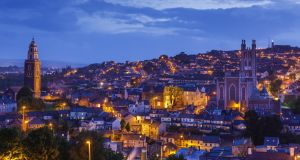 A sporting goods shop run by four generations of the same family for over 140 years is set to close later this month.

Finn’s Corner in Cork city centre is co owned by Moss Finn, a former Irish rugby International who was the youngest member of the Munster team who beat the All Blacks in 1978. His brother William Finn, who is a renowned angler, is the second owner.

The shop at the corner of Washington Street and the Grand Parade famously supplied rugby boots to the late All Black Jonah Lomu after Adidas ran out of pairs in his size. It catered for all walks of life with musician Rory Gallagher often buying his denims in the landmark building.

Even the building has historical significance, with Charles Stewart Parnell once giving a rousing speech from the second floor.

Moss Finn told The Irish Times that they are grateful for the loyalty of Cork people.

“There is an incredible amount of loyalty to local businesses in Cork. It is still a very personal city. Local businesses and small indigenous traders have a great following here.”

He says that business is still brisk.

“When you put up a ‘closing down sale’ sign people think you are closing because you have to. To the contrary. We have never had a more robust business. But we are of an age where we want to do something else. The energy levels needed to run a shop are diminishing slightly. We said we would go in our 60s rather than our 70s. The biggest businesses that kept us going were the GAA and the rugby.”

Mr Finn says Cork has always been a great city for colourful characters.

“There was wonderful characters in Cork. Sometimes a customer wouldn’t have a chance to buy something because another customer would be in and you would be listening to their philosophies on life. A book could be written about this place. The customers we have had [from all walks of life] . . . Brendan Grace, Henry Shefflin . . . You name it.”

The shop, which also sells uniforms, has faced adversity over the years, overcoming numerous recessions.

“His wife took over as the kids were too young to run it. The priest from Peter and Paul’s church over the road helped her out until my grandfather became of age to run it. We are fourth generation. There is a lot of history. So much has happened here.”

Employees at shop include John Dwyer, who has worked on site for more than 50 years.

The store will continue to sell sports wear, equipment, safety uniforms and protective clothing until the end of the month.

Moss Finn had a distinguished career and played rugby for Ireland and Munster. He was a triple crown winner with Ireland in 1982.