‘Opposing the lockdown arises from a false sense of personal freedom’ 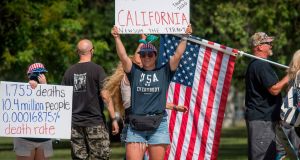 The choice between individual and collective action lies at the heart of disputes over the timing of the end to the coronavirus lockdown. Photograph: Mark Ralston/AFP via Getty Images

What motivates those groups, often a small but loud minority, clamouring for an end to the lockdown? Hawaiian shirt-wearing “boogaloo boys” preparing for the next US civil war might be surprised with what they have in common with one or two scientists. Why is coronavirus another casualty of the culture wars?

Familiarity with ideological contamination leads me to wonder whether epidemiologists are as susceptible as economists. The left-right divide in economics is a debate about the virtues of government intervention versus free markets. Which comes first, the political beliefs – the ideology – or the admiration for markets?

Adam Smith marvelled at the market’s “invisible hand” and every economics student has a moment when they experience a similar flash of insight. Market co-ordination is a thing of beauty, particularly when written down as a set of equations resolved via fixed point theorems.

But markets malfunction or don’t exist. Reality is messy and opaque. Capturing this in words or algebra is as much art as science. The equations might embody ideology; mathematics deployed to confirm beliefs, acquired long ago and for mysterious reasons. Of course, models can be a genuine attempt to capture reality. Trouble is, it’s hard to differentiate between science and charlatanism.

The “government versus markets” debate embodies trust and views of human nature. Bureaucrats may be malevolent or incompetent. Even a well-intentioned planner will make things worse if he has only partial information. So best leave it to markets.

Buried deep within the biases we bring to our models, consciously or otherwise, is often a perspective on personal freedom. There are genuine differences of opinion about how economies can be made to function better. But when it comes to government intervention, many views are pre-determined. Maybe that’s inevitable, perhaps not even a bad thing. We have to believe in something. If personal freedom means everything to you, governments are anathema and you will write down a model that explains why.

Could any of this apply to epidemiology? One class of models has told governments to take action. In Sweden, different models suggest relatively minimal government intervention, relatively few restrictions on personal freedom. How do epidemiologists come up with such different recommendations?

How can epidemiology be compared to economics? Surely ideology cannot play a large role in a science devoted to human health? You’d think so but a trawl of academic web sites reveals epidemiologists, from respectable universities and with Professor in their name, willing to debate modelling, parameter choice and data quality in a similar way to economists. There are a small number of epidemiologists who think what we are doing to our societies and economies is nuts.

My own prejudice says that some of these scientists share the same perspective as the people waving placards declaring the lockdown as synonymous with communism.

Opposing the lockdown arises from a false sense of personal freedom and a flawed assessment about the threats that government actions pose to liberty. That opposition can express itself via angry demonstrations on the steps of state capitols. Or via a different guess about a key parameter in a model.

The choice between individual and collective action lies at the heart of this. Epistemology joins economics and epidemiology. Why are some of us happy for the government to take decisions on our behalf while others take up arms to avoid anything to do with centralised control?

A popular libertarian bumper sticker in the US proclaims “defend my shores and deliver my post”: these are the only activities to be devolved from the individual to the government. And modern libertarians have doubts over the need for the US postal service.

Covid-19 deaths occur mostly within a number of overlapping groups: the elderly, some ethnic minorities, and individuals with underlying health conditions. Ending the lockdown too early poses a particular threat to these vulnerable people.

Prioritising individual freedom leads some to want the virus to run unchecked and to let those most at risk take their chances with severe or terminal illness. Lower risk individuals – the well and the young – will get the disease but probably not get very sick or die.

If there is a grim logic to the too early reopening of economies, this is where it is to be found.

Surely a better choice, even for libertarians, would be to protect – ring-fence – the vulnerable and let the young and healthy make their own choices. Indeed, this may be the rational, data-driven, optimal policy. Not all of the lockdown protestors are young or healthy. Collective wellbeing isn’t necessarily in conflict with our individual health. It’s a false dichotomy, one used time and again by climate-change deniers, Brexiteers and all the other culture warriors.

Climate change science hijacked by ideology: who cares about people not yet born, people far away, if my freedoms are restricted by governments? “Take back control”: the brilliant Brexit slogan that spoke to individualism – but without regard to cost or consequence for others.

Evolutionary biologists believe that cooperation was a learned behaviour that accelerated human development. Not for every member of our species it seems.

1 My aunt never told us that Gran passed away with no will
2 Green Party TD queries ‘usefulness’ of another appeal in €13bn Apple tax case
3 Government to push through €2bn credit guarantee scheme next week
4 If it’s safe to do so, could this be the time to spend for Ireland?
5 Brussels plans attack on low-tax member states
6 The $6bn judgment pitting Nigeria against Irish businessmen
7 Majority of employees don’t want to return to pre-Covid working patterns
8 Owners of Cork shopping centre sue for €30m after car causes fire
9 Covid anxiety among domestic holidaymakers could sink this summer
10 Datalex shares slide almost 24% as trading suspension is lifted
Real news has value SUBSCRIBE