Over 1,000 people attend as families of all involved commemorate momentous episode 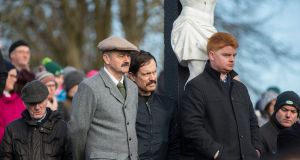 Soloheadbeg, Co Tipperary: More than a thousand people gathered at the gentle slope in front of Solohead Church on Sunday to commemorate an ambush carried out there exactly 100 years before. Photograph: John D Kelly

The people of the Co Tipperary townland of Solohead gathered on Sunday to remember momentous events which occurred there 100 years ago which would eventually lead – with many twists and turns – to an independent Irish State.

Centenary commemorations for the Soloheadbeg ambush brought with them the first gathering of the clans for all those involved – families of the eight men from the Third Tipperary Brigade of the Irish Volunteers who carried out the ambush, of the two Royal Irish Constabulary (RIC) men who were shot dead and of the two council workers who accompanied the gelignite cart to Soloheadbeg quarry on January 21st, 1919.

The names of the 12 men involved were read out on Sunday, followed by a minute’s silence. None of those involved at Soloheadbeg were ever the same again. The family of Patrick Flynn, one of the two council workers escorting the gelignite, recounted that he had suffered from post-traumatic stress as a result and died prematurely at the age of 49.

More than a thousand people gathered at the gentle slope in front of Solohead Church for a commemorative event which reflected the morally ambiguous events of 100 years ago. Previous commemorations had sought to exalt the ambushers, while ignoring the ambushed. That omission was put right on Sunday.

For the first time, the names of the two RIC men shot dead in the ambush, Constables James McDonnell and Patrick O’Connell, will be recorded at the monument in Solohead village on a new message board which explains what happened at Soloheadbeg.

Tim Hanly of the local centenary committee said some might ask why local people had taken on the onerous task of organising the commemorative event, which marks the start of the War of Independence.

“There have been times over the last few months faced with many setbacks that we asked ourselves the same question,” he admitted.

The committee persevered, with one overarching goal: to conduct the commemoration in as “inclusive a manner as possible, recognising that while we have a shared history, we don’t have a shared memory”.

Minister for Culture, Heritage and the Gaeltacht Josepha Madigan expressed similar sentiments while praising the “respectful community-led commemoration”. She saw no contradiction between honouring the memory of the two RIC constables and those on the other side in the War of Independence.

“If we truly respect our past, we must be truthful in the way we commemorate it. We must do so with empathy, with understanding and respect. We commemorate what happened, not what we would have preferred to have happened.”

Contemporary events were addressed by Martin Mansergh, the former government minister and local historian who unveiled the new message board in Solohead. Peace in Ireland had been achieved, he said, with the return to a frictionless border – which was now under threat. “A guarantee is needed that it should not disturb different communities who live amongst each other on both sides.”

The oration was given by Fianna Fáil TD Éamon Ó Cuív, grandson of Éamon de Valera. He gave an impassioned defence of the motivations behind the ambush, stating that the Irish Volunteers involved had been instructed by headquarters to procure arms wherever they could get them.

It was “naïve beyond belief”, he told the assembled crowd, to believe the British government would cede independence to Ireland without a struggle. That independence, he added, had resulted in a prosperous, stable country which preserved a sense of community.

After the ceremonies were over, the families of those involved gathered around the new message board for photographs.

Seventy members of the family of Paddy McCormack, one of the Volunteers at Soloheadbeg, attended the event – among them Patrick McMahon from New York, his grandson.

“I’m very proud of my grandfather and what he and his compatriots did for the fight for Irish freedom, but I understand the controversies behind it. I feel bad for the families of those who died at Soloheadbeg.”

On the other side, numerous relatives of Constable McDonnell attended, including his grandnephew, Eamonn McDonnell. He said the McDonnell family were disappointed that the new memorial at the site of the ambush, 3km from Solohead village, made no mention of the RIC officers killed.