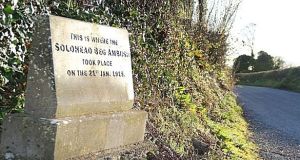 Historian and former government minister Martin Mansergh will unveil a new message board at the Soloheadbeg monument. Photograph: The Irish Times

In 2005 Vincent McGrath made international headlines when he was jailed along with four others over the Shell to See controversy.

Together they became the Rossport Five. He, along with the others, served 94 days in Mountjoy prison for refusing to obey a temporary court injunction.

McGrath still lives in Rossport, Co Mayo, and the pipeline has been rerouted away from his home.

On Sunday he will travel along with many members of his family to Soloheadbeg, Co Tipperary, for the centenary commemorations which mark the ambush that occurred there on January 21st, 1919.

The first shots of the War of Independence killed his great granduncle, Constable James McDonnell, who was from Belmullet, Co Mayo, along with Constable Patrick O’Connell from Coachford, Co Cork.

“I often heard my grandmother say that she didn’t like Dan Breen because he killed her uncle,” he said. “She was quite magnanimous about it because she didn’t say she hated Dan Breen. She didn’t like him rather than hated him. She would talk about it when I was a child and say, ‘this has nothing to do with you, go outside’.”

Mr McGrath said he had never visited Soloheadbeg before but was impressed by the “ecumenical approach” taken by the organisers of Sunday’s centenary commemorations which will occur in Solohead village.

Is the past a foreign country?

The Soloheadbeg centenary committee have invited relatives of the two Royal Irish Constabulary (RIC) officers who were killed along with the relatives of the men from the Third Tipperary Brigade who carried out the ambush.

“I have no baggage and no preconceived ideas. I’m just going to commemorate the events from a historical point of view. I’m hoping it will heal the wounds of the past,” said Mr McGrath.

What does he think of those who killed his relative? “I think they were people of their time . . . I don’t know what I would have done at the time. Michael Ryan of the commemoration committee put it very well that they could have swapped side in other circumstances.”

Sunday’s programme will begin with a mass in Solohead Church which will be celebrated by the Archbishop of Cashel and Emly Kieran O’Reilly.

Historian and former government minister Martin Mansergh will unveil a new message board at the Soloheadbeg monument.

Minister for Culture Josepha Madigan will then lay a wreath on behalf of the Government at the site of the Soloheadbeg Ambush Memorial, in remembrance of all who suffered and who lost their lives during the independence struggle.

1919 - War and Peace, the latest in The Irish Times Century series, will be published on Monday.