Red-line compromise key to any Brexit progress for May 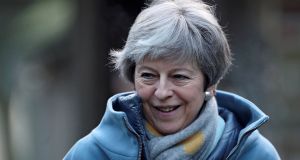 Britain’s prime minister Theresa May: expected to table a neutral motion in the House of Commons on Monday. Photograph: Hannah McKay

The coming week sees further efforts to achieve a cross-party consensus on Brexit in London, while Tánaiste Simon Coveney travels to Brussels for a series of meetings, including with Michel Barnier, the EU’s chief Brexit negotiator.

Groups of MPs will table amendments, with one calling for the article 50 negotiating period to be extended, and others seeking to give MPs the power to put forward their own Brexit plans.

At the centre of debate, as usual, is the backstop, the insurance clause that seeks to avoid a hard border in Ireland if the EU and UK cannot agree a post-Brexit trading relationship. In effect, the backstop would see the EU and UK maintain a common customs territory, with add-ons – in both customs and regulations – for Northern Ireland to keep the Border open.

With the House of Commons still unable to decide what it finds acceptable, the risk of a crash-out Brexit at the end of March grows. As do calls for the Government to give ground on the backstop.

One proposal repeatedly floated in London is for the backstop to be time-limited for a number of years if it is ever invoked.

However, sources in Dublin repeatedly insist there will be no change to the backstop as set out in the withdrawal agreement struck between the EU and the UK government last November. The message is being delivered in public and in private from both Dublin and Brussels to London.

That message was reflected in language used by both Philip Hammond, the UK chancellor, and Keir Starmer, the Labour Brexit spokesman, in recent days.

Hammond has been in consistent contact with Government figures and Coveney is known to keep lines of communication open to Starmer.

Speaking on the BBC’s Andrew Marr Show on Sunday, Starmer also acknowledged for the first time that the backstop was needed for a deal.

Yet Taoiseach Leo Varadkar, Coveney and others across the EU say that if the UK is to change its red lines, they will reciprocate.

The not-too-subtle hint is that this could be done by a move from London to a much closer post-Brexit relationship between the EU and UK, ie permanent British membership of the single market and customs union. Another British red line is that Northern Ireland must not be in a different customs territory to the rest of the UK, but this is extremely unlikely to change.

The final Brexit deal contained two elements: the 485-page, legally binding withdrawal agreement and the accompanying, looser, political declaration sketching out the post-Brexit relationship between the EU and UK.

The political declaration was designed to be a document that could be rewritten to reflect changing priorities from London.

One Dublin source said that a change in London would most likely mean an adjustment of the political declaration “or perhaps some addition to it, addendum etc”. The withdrawal agreement “is seen as a settled text by EU side and which will still be needed, including the backstop”, the source said.

While some in Dublin are unwilling to spell out how the EU could formally reciprocate if London moves, the only thing – given the insistence on the withdrawal agreement and backstop remaining untouched – that can be offered is a new wording in the political declaration.

It could be rewritten to give concrete expression to the view that a much softer Brexit means the backstop would never be invoked. But the backstop would remain in place in the legally binding withdrawal agreement, even if it is never used.

This scenario requires the House of Commons to support the so-called “Norway-plus” post-Brexit relationship, which would mean May accepting the free movement of people – and breaching her red line of restricting immigration.