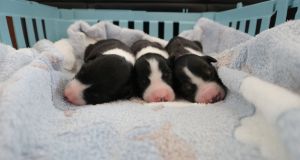 Three puppies were taken to be treated for hypothermia, hypoglycaemia and hunger by the ISPCA after being found in Co Donegal. Photograph: ISPCA.

Three new-born puppies had a lucky escape in Co Donegal this week after being stuffed into a plastic bag and thrown towards a river, only for the bag to become caught on barbed wire.

The Irish Society for Prevention of Cruelty to Animals (ISPCA) was called to the scene near Drumkeen just before 9pm on Wednesday by a concerned member of the public.

Alexander Smyth, ISPCA director of veterinary service, retrieved the puppies from the plastic bag, which was dangling from the top of a barbed wire fence.

The animal rights group said if the bag had ripped during the rescue attempt the three puppies would have fallen into the fast moving water below, and “almost certainly” have drowned.

The three new-born collie puppies had been “deliberately dumped” by their owner, the ISPCA said.

The puppies were taken to be treated for hypothermia, hypoglycaemia and hunger by a veterinary team. The group estimated the dogs were between seven and 10 days old, but it was not known when they were abandoned.

Kevin McGinley, a senior ISPCA inspector, said it was “disturbing how anyone could be so cruel and heartless, to put three vulnerable little puppies in a plastic bag leaving them to dangle over a river to an inevitable death”.

The situation could have been avoided if the owner had spayed the puppies mother, or contacted the ISPCA about the unwanted animals, he said.

Mr Smyth, who rescued the animals, said the puppies “are doing well but will require intensive support as they are very young and now orphans.”

“The abuse and needless suffering of animals is unacceptable,” he said, adding that anyone with knowledge of the incident or similar cases of neglect to contact authorities.