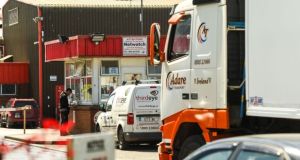 Rosderra Irish Meats plant in Roscrea, Co Tipperary, where, according to Sinn Féin TD Brian Stanley had 140 workers were out sick and 120 had tested positive in April. Photograph: Diarmuid Greene

Migrant meat plant workers have been “frightened and angry” over the lack of safety measures to protect against Covid-19 in their workplaces, according to a migrants’ rights group.

In an opening statement to the Oireachtas Covid-19 committee, the Migrant Rights Centre Ireland will tell TDs on Friday that they began to receive complaints from workers in the meat processing sector on March 26th about their working conditions and the lack of health measures.

“They were worried, frightened and angry about the conditions they were being forced to work in, and could foresee that without appropriate health and safety measures, their health and their families would be at risk,” Edel McGinley, director of the centre, says in her opening statement.

The meat processing sector was one of the worst industries affected by Covid-19 outbreaks because of the prolonged close proximity between workers on meat production lines in factories.

The Irish Congress of Trade Unions (Ictu) says in a statement to the committee that some meat processors “completely ignored the obvious need for enhanced health and safety measures”.

The trade union group says the “slow response of Government and some statutory authorities to the concerns of unions in the sector in our view contributed to the high number of cases”.

Ictu said that low-paid work in the sector forced many workers to share rental accommodation which “undoubtedly was a factor in the spread of Covid-19 in the sector”.

“Unions raised concerns with employers and public representatives about the potential spread of Covid-19 in meat processing facilities,” Ictu said in a statement.

It claims that Siptu sought to engage with the Government and the meat industry throughout April but “in the main their requests were ignored”.

“It is also clear that if the concerns raised by unions early in the crisis had been taken more seriously the high rate of infection in the meat processing plants could have been prevented,” Ictu says in a statement.

Cormac Healy, a director of Meat Industry Ireland, which represents the plants, will tell TDs that the first Covid-19 case in a meat plant was reported on March 17th but that it was not until May 15th that the HSE published its guidance on the disease for the meat sector, two months after the industry implemented mitigation measures in their plants.

The migrant centre estimates that migrant workers account for 58 per cent of meat plant workers. They are mainly Polish, Lithuanian, Romanian, Latvian, Moldovan, Slovakian, Brazilian, South African, Batswana and Filipino. Six in 10 migrant workers are from the EU, it says.

In the statement submitted ahead of appearing at the committee, Ms McGinley said there was a “very mixed picture” on when protections were put in place to prevent workers from catching the virus in their places of employment.

“The varying timeframes in which employers introduced these measures, shows the inconsistent response which at the beginning of lockdown exposed workers unnecessarily to Covid-19, while showing the gaps in statutory oversight,” she says in the statement.

“Too much trust was given to a sector with an inconsistent health and safety track record.”

Some 27 per cent of 68 migrant workers in meat processing plants surveyed by MRCI said that it took five weeks or longer to put protection measures in place during the pandemic.

Mr Healy will tell say there are “not active cases” of Covid-19 in the plants and that more than 97 per cent of affected staff have returned to work and the remainder are isolating and recovering.

In advance of the hearing, Siptu said it was angered by its “exclusion” from appearing before the committee.

The trade union said it was “the first representative body to raise concerns about the numerous issues within the meat processing industry, which it is believed gave rise to Covid-19 transmission within these workplaces”.

Union representatives “have not been requested to attend... despite the many and important issues we wish to raise”.

Siptu manufacturing division organiser Greg Ennis, said there had been a total of 1,056 confirmed cases of Covid-19 infections of meat processing plant workers out of a total workforce of approximately 15,000.