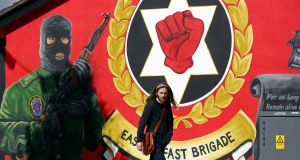 The Ulster Defence Association, the Ulster Volunteer Force and the Red Hand Commando on Tuesday released a joint declaration of intent “recommitting” themselves to the peaceful and democratic principles of the 1998 Belfast Agreement. Photograph: Cathal McNaughton/Reuters. 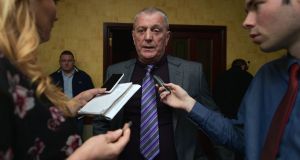 Jackie McDonald, former head of the UDA, speaks to reporters after the launch of the Loyalist Community Council at the Park Avenue Hotel in Belfast. Photograph: Charles McQuillan/Getty Images.

Loyalist paramilitary have issued a statement pledging to “eschew all violence and criminality”.

The Ulster Defence Association, the Ulster Volunteer Force and the Red Hand Commando released a joint declaration of intent “recommitting” themselves to the peaceful and democratic principles of the 1998 Belfast Agreement. Tuesday is the 21st anniversary of the 1994 loyalist ceasefire.

“If there are those who attempt to use current or past associations with our organisations to further criminality they will be disowned and should be aware that they will not be permitted to use the cover of loyalism,” the loyalist groups said in the statement.

“We expect the authorities to take whatever steps are necessary to deal with any offenders. Anyone misusing loyalism for criminal purposes should be held accountable to the criminal justice system.”

They said Northern Ireland was “not inclusive” of the loyalist community and that within that community there was a “vacuum” and a “significant disenchantment” with politics. “It is no coincidence that the attainment levels of working class loyalist young people are the lowest in the United Kingdom, ” they said.

The loyalist groups said they were forming a Loyalist Communities Council which would be independently chaired and have a secretariat to advance the cause of loyalism.

“It is our hope that the council will become a vehicle for attracting meaningful funding and initiatives to assist loyalist communities…enabling loyalism to play a full and active role in the community and wider remit and in constitutional politics.”

Between 1966 and 1999, according to the Lost Lives book, the UDA, UVF and Red Hand Commando killed 955 people. It is estimated that they were involved in more than 50 killings since then.

Mr Powell, who as one of Mr Blair’s most senior aides while he was prime minister and closely involved in the peace process, said loyalists had been left behind and it was a “terrible mistake to leave them out in the cold”.

He described the initiative as “a process and not an event” and said the groups had pledged to renounce all violence and criminality.

“Some may argue that these organisations should just disappear. The experience from around the world suggests that would be a mistake,” he said at a press conference in the Park Avenue Hotel in east Belfast.

“Other violent groups would simply take over the names UVF, UDA and the Red Hand Commando and carry on with paramilitarism. We really don’t want to see a Real UVF and a Continuity UDA,” he added.

“This is not about money. These men have taken this step because it is the right thing to do,” said Mr Powell.

Mr Campbell, who is still involved in the UUP, said the initiative was born out of concern that there was “drift” within loyalism and “a significant risk of a return to violence”.

Billy Hutchinson, leader of the Progressive Unionist Party, which is linked to the UVF and Red Hand Commando, said people should suspend any cynicism they might entertain. “This is a very positive step. I am asking people to give it a chance, give it six months to see what we can do,” he said.

1 Open Ireland as soon as possible - Tourism chief warns of 'catastrophic' impact of pandemic
2 World, look away now – these are dark days for the United States
3 Bobby Storey: The IRA's planner and enforcer who stayed in the shadows
4 Full line up of junior ministers unveiled as Taoiseach accused by one TD of snub
5 Who are the new junior ministers? All their profiles are here
Real news has value SUBSCRIBE