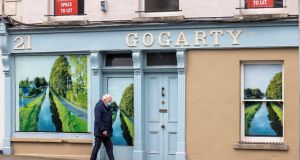 There has been one new Covid-19 related death and 35 new cases reported to the Health Protection Surveillance Centre.

This is the lowest number of daily cases in almost a fortnight, since July 29th.

However, acting chief medical officer Dr Ronan Glynn warned the daily number of new cases is likely to “rise and fall” this week.

“It is important to look at the wider trends we see in this disease in Ireland for context, and not simply one day’s figures in isolation,” he said.

“It will be next week before we see if measures introduced last weekend in Kildare, Laois and Offaly have had the desired effect in suppressing Covid-19 in these areas and minimising community transmission.”

There have now been 1,773 Covid-19 related deaths in Ireland.

Those aged under 45 years accounted for 71 per cent of the 35 new cases.

Some 24 of the 35 cases are associated with outbreaks or are close contacts of confirmed cases, while five were identified as community transmission.

Six of the cases were in Carlow, five in Clare, and the remaining 24 were in Cork, Donegal, Dublin, Limerick, Meath, Tipperary, Wexford and the three counties subject to local restrictions – Laois, Kildare and Offaly.

The low number of cases from these three counties suggests efforts to bring outbreaks that originated in four meat processing plants in the region may be working.

On Tuesday night, it emerged that all 210 workers at one of the four plants, Carroll’s Cuisine in Tullamore, Co Offaly, who were tested for Covid-19 on Sunday have received negative results. The staff were tested by HSE public health specialists at the weekend after nine staff at the facility had contracted the disease.

A spokesman for the business said operations at the facility, which ceased on Monday, would remain suspended until after consultations had taken place with HSE staff.

Meanwhile, an immunology expert has warned that restrictions put in place across the three counties will need to be extended if cases of the coronavirus increase.

Prof Tómas Ryan said it may be necessary to extend the partial lockdown to four or six weeks, as he could not see “how two weeks will be sufficient to contain this” outbreak.

Following significant spikes in cases tied to the clusters of Covid-19 at meat processing plants the Government announced localised restrictions for Kildare, Laois and Offaly last week. The measures include travel restrictions and the closure of restaurants and pubs serving food, as well as indoor entertainment venues, for two weeks.

Prof Ryan, a molecular biologist at Trinity College Dublin’s school of biochemistry and immunology, said that “local lockdowns are better than the whole country” being restricted.

He said that while more people were wearing face coverings, he felt they were not observing enough social distancing and that the reopening of schools at the end of the month may have to be reconsidered.

Healthcare workers who continued to put their lives on the line did not need to have to cope with a second surge of the virus, he said.

Having a traffic light system of “green” and “red” zones would allow some counties to open up if they had not had cases for over two weeks, he told Newstalk Breakfast.

“This system has been used in other countries and it worked very well. The evidence is that using the green zone system can flatten the curve,” he said.

Dr Josep Jansa, of the European Centre for Disease Prevention and Control (ECDC), said that Ireland needs to implement more intense contact tracing measures to prevent a resurgence of Covid-19.

He told RTÉ Radio’s Today with Sarah McInerney an assumption that being outdoors was safe had “definitely contributed” to the resurgence in cases across some European countries.

Dr Jansa said evidence gathered in different countries had indicated that children and school settings were not the main driver of the pandemic. He said it may not be necessary to close schools if some cases of Covid-19 were identified.

There was a need to be selective, especially now seven months into the pandemic, and if there was one case or an outbreak, then that location needed to be targeted, he added.

Prof James McInerney, a microbiologist at University of Nottingham, said it was unlikely there would be a second wave of the disease in Ireland unless health authorities “completely take their eye off the ball”.

Ireland “is doing a decent job at present” in suppressing Covid-19, he told RTÉ’s Morning Ireland.

The decision to lockdown an area or region was an effective measure, but should only be a last resort, he said. The R-number, effectively the rate at which the virus spreads, “dropped like a stone” the day after lockdown was imposed, from 2.4 to well below 0.5, he said.

Prof McInerney said he was still hopeful about the early production of a vaccine for Covid-19 and that preliminary studies have been positive.

Meanwhile, Prof Karina Butler, chair of the National Immunisation Advisory Committee, has said that a new nasal flu vaccine will be available for children returning to school next month.

The new vaccine would be offered to children up to 12 years of age, and it is hoped it will reduce the rates of flu during the winter.

“Up to now, the flu vaccine by injection has been available for those that are considered at higher risk, and now there is a nasal flu vaccine,” she said.

Reducing fevers and the incidence of flu-like symptoms will reduce any confusion with Covid-19 symptoms, she said.

Prof Butler said that most children who get the flu have relatively mild symptoms, but every winter there are children who become “significantly ill”, she told Newstalk Breakfast.